This six-foot-tall zinc figure of a Union Soldier perched on a cast iron fountain base was presented as a gift to the town of Oak Bluffs, Massachusetts by Charles Strahan, a former lieutenant in the Confederate Army who relocated to Martha’s Vineyard in 1891.

The stock statue was manufactured by J. W. Fiske of New York City. After its original installation in the Village Square it was moved twice, before settling at its current location in Ocean Park. The figure is also reported to have toppled during a hurricane over fifty years ago.

At the time of examination, the memorial appeared to have been coated with over fifteen layers of paint. The figure was missing several pieces (a hand and a rifle, the band of the soldier’s cap, and portions of his ammunition pack). The solder joints that held the figure to the base were severely compromised. The plinth was deteriorating at such a rate that it appeared the entire base would need to be reconstructed. Additionally, conservation work was needed to reverse the effects of earlier, less skilled repair jobs – one performed by a plumber.

The paint was removed, a new stainless steel armature was installed and new zinc formed sheets and castings were created from molds taken from another version of the stock sculpture. Deformed and damaged zinc components were reformed and re-soldered into their original locations. The base of the memorial was disassembled and restored, including the removal of all failed coatings, casting and installation of replacement parts, and repainting. The fountain works were refabricated and made operational for the first time in decades. 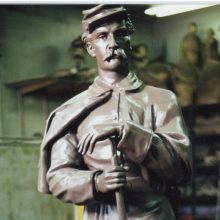 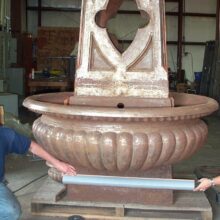 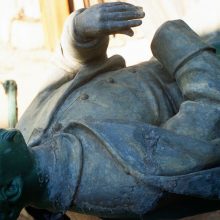 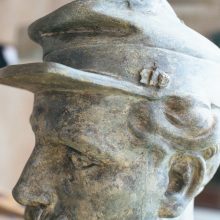 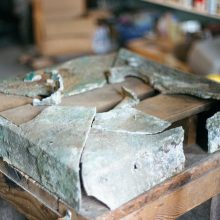 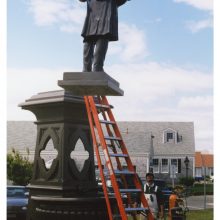 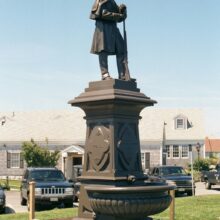