The National Law Enforcement Officer’s Memorial is an elegant and expansive memorial to the over 18,000 officers killed nationwide in the line of duty since 1792. Situated near the Judiciary Square Metro station, the monument features two bluegray limestone walls inscribed with the names of the fallen, each surmounted by a statuary group of a lion protecting its cubs. Set among a variety of trees and plantings, the result is a dignified and peaceful urban park.

The monument, dedicated in 1991, had accumulated staining and soiling consistent with its age and exposure over the last two decades. The soiling observed at the Memorial consists primarily of biological growth which tends to accumulate in pits or textured sections that retain moisture, particularly on horizontal surfaces, directly exposed to weather with less drainage and chance of drying. The soiling was observed to be more pronounced in locations under trees where the combination of deposits from the trees, reduced rain washing, and shade contribute to optimum conditions for biological growth. Various cleaning tests performed in recent years had yielded little success in reducing the disfiguring soiling.

We were engaged in 2010 to test and then carry out cleaning procedures to reduce the discoloring biota and associated soiling. A specific condition imposed on the cleaning was that it could not interfere with the newly reetched lettering, either by removing the paint in the recesses or abrading the fine carving. Through a careful battery of tests, designed to address high priority conditions but not replicate previous tests, our conservators developed a innovative cleaning process that took advantage of a newly developed cleaning gel. Carried out on a portion of the memorial to provide training for staff, it proved able to permeate into the small recesses and remove biota while leaving the lettering intact. As the memorial nears the commemoration of its twentieth anniversary, this not only improved its appearance but, by reducing moisture retention, aided in its long-term preservation. 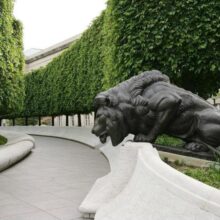 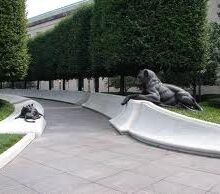 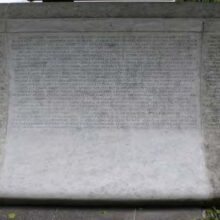 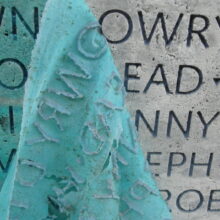 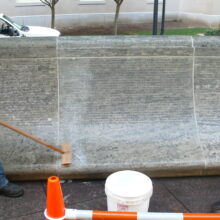