Opening in 1932, the Paramount Theatre, designed by Architect Arthur Bowditch, with a richly appointed French art deco interior typical of the Paramount chain theaters. It was one of the first movie houses in Boston to play talking motion pictures. In 2005, Emerson College announced plans to renovate the Paramount Theatre, building an entire performing arts facility in and around the theatre. In 1980, the theater was gutted and all of the finishes removed because they were set on asbestos surfaces. EverGreene was brought on in the early phase of the project by the design team to perform a finishes investigation to determine pre-1980’s historic plaster and paint.

When Emerson College took over the facility in 2003, EverGreene was chosen as part of the design-build team. As part of our design-build approach, we carefully studied what little was left of the gutted theatre and were able to piece together clues to determine the original color palette and decorative elements. We determined that the historic designs were plagiarized directly from the Parisian Catalogue Des Arts Décoratifs. We presented our research and findings, then the entire auditorium was reconfigured, and the mural decoration was faithfully reproduced to match the original.

The mural in the proscenium of the theater was original and therefore conserved. The murals on the side walls had all been on canvas and were replicated to match the original. All of the work was produced digitally on canvas in our New York studio. EverGreene’s skilled craftsmen hand-painted a replication of each section of the repeat pattern, including production of digital trompe l’oeil elements throughout the theater and lobby. Our designers then digitized the paintings and printed them on canvas to be installed and some hand-painted on site. 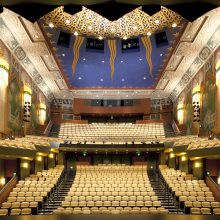 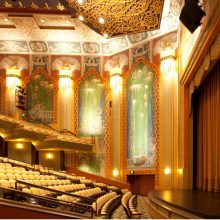 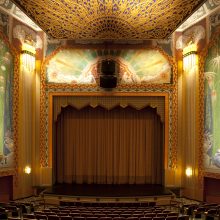 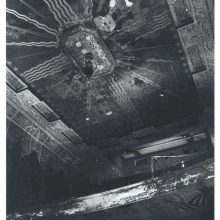 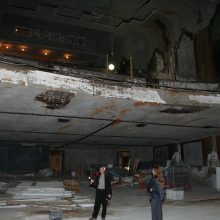 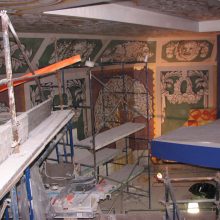 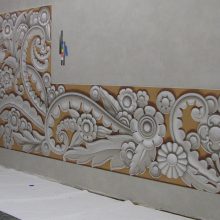 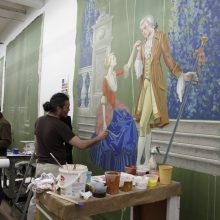