The Plantation Agriculture Museum was established in the 1960’s by a local Arkansas planter, Robert Dortch. The Dortch Cotton Gin (the only one of its kind in the continental United States) serves as a showcase exhibit in the museum. The gin was recovered in haste, from a barn that was due to be demolished by the state, using inmates from a local penitentiary. The various pieces of equipment had been stored outside under cover and had gathered an incredible build-up of debris and corrosion products over the years, some of which actually existed from the years that the gin was still in operation. The wooden components of the gin required stabilization and localized repairs, and in some cases, complete replacement. In addition, there were several broken or missing glass panes as well as a significant number of bent, damaged or missing sections of sheet metal that needed to be repaired or replaced.

We transported majority of the components from the museum to their conservation facility in Maryland, where it was determined the cleaning and repairs would be most successfully performed. The interior and exterior areas of the metal components were cleaned using water jets and the wood components with an appropriate detergent solution and water. Loose corrosion was removed from the metal and heavy accumulations of grease and oil were removed from both the wood and metal components. Once the wood and metal mechanisms were stabilized, broken glass was removed and replaced in-kind, bent sheet metal was straightened, and all new wood, anchoring hardware, belts, pipes, and ductwork were artificially distressed to match the existing components. The gin was then transported back to the newly constructed gin facility where we supervised and sub-contracted the reinstallation to a world-renowned cotton gin expert, to ensure the historical accuracy of its installation. 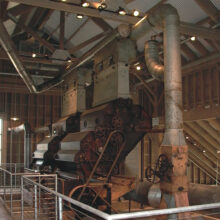 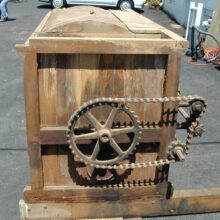 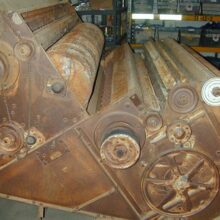 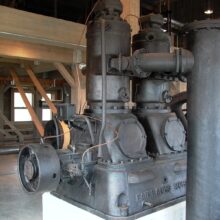 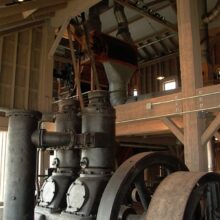 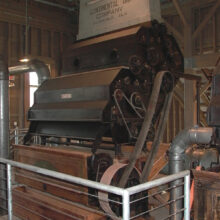 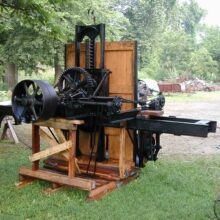