Located at 500 Mulberry Street in Des Moines, Iowa, the Polk County Courthouse is one of the largest and most architecturally significant courthouses in Iowa. It is the third and current courthouse erected in Polk County. The first courthouse was constructed in 1848, with the second following closely after, being constructed between 1858 and 1862. The final, present structure was erected in 1906. It was designed by the local Des Moines firm of William T. Proudfoot and George W. Bird. One of Iowa’s most renowned firms, Proudfoot and Bird were prolific during the first two decades of the century, creating numerous public buildings throughout the state. Such examples include the Jasper County Courthouse in Newton, 1909-1911, and the Greene County Courthouse in Jefferson, 1917, both neoclassical.

The Polk County Courthouse is one of a few remaining Beaux Arts courthouses in Iowa; with its use of a gray limestone façade articulated by a rusticated base, rows of pilasters above, and use of sculpted ornament, it is a supreme example of early-twentieth century Beaux Arts architecture. The building was listed on the National Register of Historic Places in 1979 for both its style and the architects who designed it.

We began Phase 1 of the restoration in 2018, which consisted of a historic finishes investigation in order to determine the original paint color and scheme of the walls. During this investigation, our conservators discovered original historic paint colors and matched them to the Munsell color system. Our conservators also unearthed multiple detailed stenciled patterns that had been covered with flat paint.

EverGreene was then contracted for subsequent phases of the project, during which the actual restoration was conducted. The EverGreene team repaired any deteriorating plaster, as well as took molds of original plaster details and recast them to replace missing or deteriorated pieces. The team also performed finishes restoration using information from the historic finishes investigation. In addition, historic wall coverings were removed and the colors were matched in order for our Design Team to create replacements. Scagliola elements were also treated; all surface grime was removed, and their original appearance was restored. 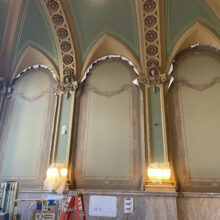 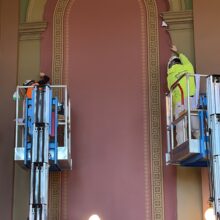 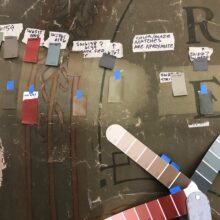 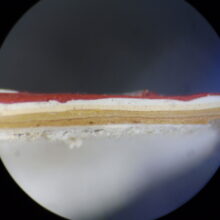 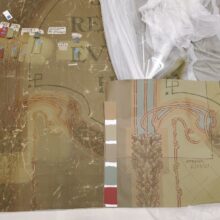 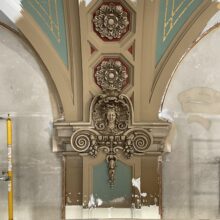 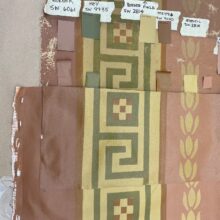 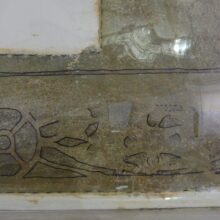 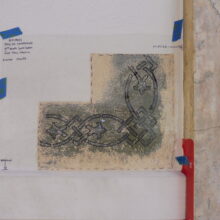 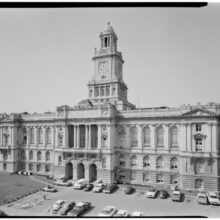 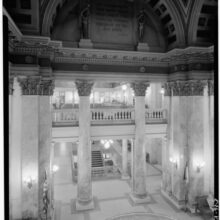 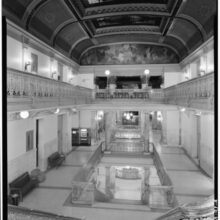 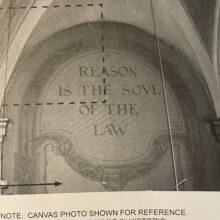