We were contracted to conserve three historic pens and associated documents significant to the history of the U.S. Forest Service. The three pens were used by U.S. Presidents—Roosevelt, Coolidge and Ford—in signing important legislation related to the Forest Service. They had formerly been framed with paper documents describing their origins in wooden and metal frames and were in various states of deterioration. The varnish of the two wooden dip pens was flaking and abraded by the wire mounts; metal elements of the ballpoint pen were found to be corroding. The paper document accompanying the Roosevelt pen was in need of conservation treatment due to discoloration and degradation from iron gall ink corrosion. All the documents were heavily discolored and adhered to unsuitable mounts.

We removed the pens from the mounts, removed corrosion products and laid the original varnish down where possible, and applied a conservation varnish to areas where the varnish was lost. Care was taken not to remove any ink stains or evidence of use. The documents were separated from their backing, deacidified by washing, and flattened. Then the documents and pens were remounted in archival frames with museum-quality glass, in frames of white oak chosen with the client to match the Mission style furniture of the Forest Service offices. 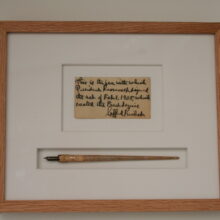 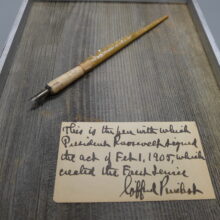 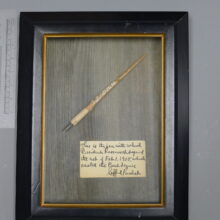