The port-side gangway door from the Titanic’s D-Deck opened into the first class reception area; it was literally the “front door” for first class passengers boarding the ship. It was first observed in 1993 still attached to the ship’s hull. Five years later it had separated from the ship and was recovered from the ocean floor on August 28, 1998. Referred to as the “D-Deck Door”, it is primarily steel/iron construction with eight brass locking mechanisms and two brass window frames, which retain 1-inch thick glass windows. The gasket along the rim of the interior side of the door provided a watertight seal is preserved. The door stands 73 ½ inches high and 56 1/8 inches wide.

After recovery, desalination and conservation treatment of the door was performed in France. The door traveled extensively as part of international exhibitions. Unfortunately, it was not always transported, displayed, and stored in climate-controlled environments. Fluctuations in temperature and humidity caused the once firmly attached rusticle incrustations to delaminate from the surface. By 2004, the D-Deck Door displayed signs of instability and was in need of complete re-treatment.

Our team performed the conservation re-treatment of the door in 2005. Treatment began with cleaning and wax removal by low pressure steam followed by cleaning of the steel using ultra high pressure waterjets. The reappearance of salts at rivet interfaces with the plate necessitated immersion in a bath of deionized water for a period of time until salinity levels were reduced. Following soaking, the stable ferrous corrosion products that remained on the surface were (converted) with Fertan, a proprietary blend of tannic acid and phosphoric acid; brass parts were treated with the corrosion inhibitor benzotriazole (BTA). Glass was cleaned and gasket materials were stabilized. Finally, a protective coating of blended microcrystalline waxes and a corrosion inhibitor (VPCI) was applied. 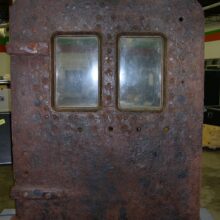 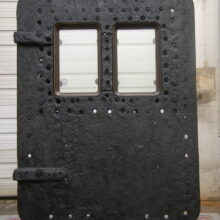 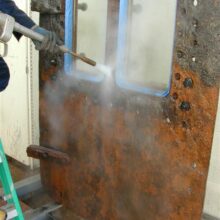 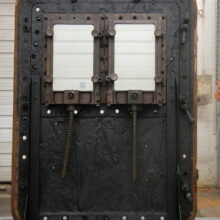