Between 1914 and 1916, agricultural industrialist and one of the founders of the International Harvester Company, James Deering, built his European-inspired winter home on Biscayne Bay in Miami. This property, Vizcaya Museum and Gardens, is now a National Historic Landmark. The formal gardens include an outstanding collection of statuary and objects dating back to antiquity. These include a 2nd century Roman altar, formally in the Borghese collection, installed beside two 10th century Lombardic carved marble columns in the Fountain Garden.

The garden was flooded in the storm surge of Hurricane Wilma in 2005 and both artifacts were subjected to extensive salt contamination as well as damage from flying and floating debris. We were contracted to restore the losses, desalinate, and clean the fragile ancient marbles. Each was extensively rinsed with clean, filtered water until salt readings were reduced to acceptable levels. Biological growth and soiling were removed by detergent washes and the use of biocides to remove deposits that still contained salts. Failed previous synthetic fills were removed and the voids were cleaned. Losses, including a part of the decorative band on the capital of one column, were replaced with lime-based mortars or stone dutchman repairs according to the client’s goals. Work was performed during treatment of more than 30 statues damaged in the hurricane. All work was documented in a treatment report submitted upon completion of the project. 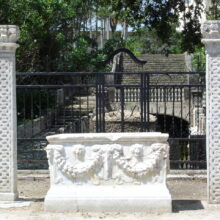 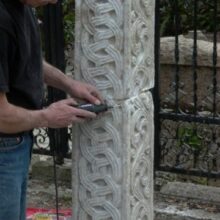 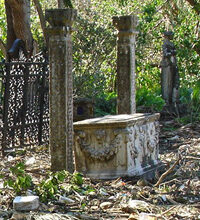