Constructed from 1903 to 1908, the Russell Building is the oldest of the Senate office buildings and a prominent example of Beaux-Arts style. Designed by the New York architectural firm of Carrère and Hastings, the Russell building was a response to overcrowding at the neighboring Capitol building. Upon the 100-year anniversary of the Russell building, the Architect of the Capitol sought to identify elements of the structure that required attention as a result of wearing, soiling, or corrosion.

Our conservators were contracted to address the corrosion and coating loss of both interior and exterior bronze elements at the Russell Senate Office Building, C Street Elevation. This included decorative railings, doors, and windows. The conservation treatment of these bronze architectural features began in March 2017 with the removal of existing coatings and patination as needed, as well as corrosion, which was evident in the build-up of verdigris (copper sulfate). This cleaning revealed areas that needed to be repaired. Bronze putty fill was used to repair damaged areas. Per the Architect of the Capitol’s specifications, the bronze was repainted to a medium statuary brown and then given a spray-applied solvent-based Incralac coating.  Many of the elements were treated on-site, but the courtyard railings were removed and transferred to a facility in Alexandria, VA, to ensure proper conditions during micro-abrasion, re-patination, and lacquer application. This work was completed between 2016 and 2017. 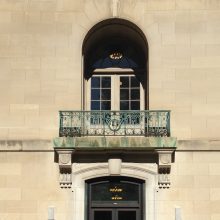 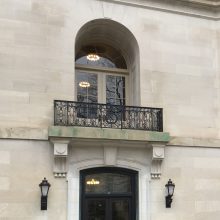 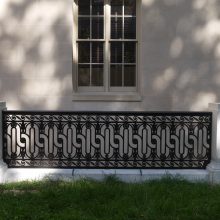