The W. H. Mullins Company of Salem, Ohio was the primary firm creating formed sheet metal sculptures in America in the late 19th century. Using repoussé techniques like those used on the Statue of Liberty, the company produced unique, iconic works such as the Diana on the original Madison Square Garden and Hermann the Cheruscan in New Ulm, MN. They also produced catalog figures in sheet zinc or copper of allegorical figures like Justice and Liberty, which were widely used atop courthouses throughout the States.

Their copper figure of Justice had stood atop the Cascade County Courthouse dome in Great Falls, MT for more than 100 years before it was toppled in a windstorm in 2004. The original mountings sheared off and the copper skin was severely damaged in the resulting fall. Elements were deformed and lost and the original structure could no longer be used in remounting.

We were contracted to restore and remount the salvaged work of art. Using our expertise in sheet metal sculpture conservation, conservators restored or recreated all of the damaged or missing copper elements. Working with the courthouse’s architect, a new structural system for the statue’s interior and mounting for the dome were designed, fabricated and installed so as to maximize stability and minimize potential galvanic corrosion. The copper was then patinated to match the conditions prior to the damage, crated, shipped and reinstalled atop the courthouse in 2006. 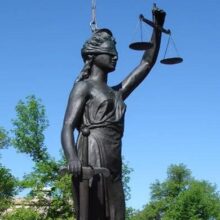 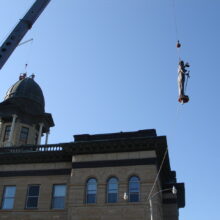 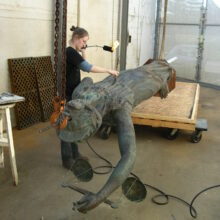 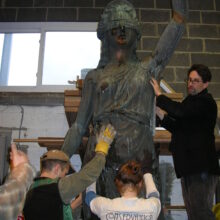