The Santa Barbara County Courthouse, a prime example of Spanish Colonial design, features a Mural Room where the history of Santa Barbara is depicted on more than 4,100 square feet of canvas murals. Painted by artist Daniel Sayre Groesbeck, a native Californian, these enormous works of art manifest the historical marks for Santa Barbara: the Sebastian Vizcaíno’s founding expedition, the Canalino Tribe that bordered the Santa Barbara Channel, the arrival of John C. Frémont, and the adaptation of the American rule.

Despite having been cleaned following an electrical fire in 2010, the murals and many other decorative architectural elements were in need of significant restoration and conservation. In December 2014, EverGreene craftsmen began the work at the Mural Room by documenting existing conditions, repairing damaged plaster and canvas, in-painting areas of loss and damage on the historic murals and surrounding architectural elements, and stabilizing cracking paint. Designed and painted by Italian-born artist John B. Smeraldi, the ceiling beams, frieze, and corbels were stabilized and restored, and the murals were conserved to their original brilliance, returning an enchanting aspect of Santa Barbara’s rich history back to the community.

The Mural Room reopened to the public in June 2015. 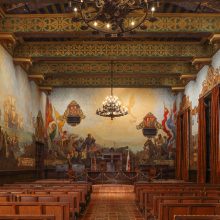 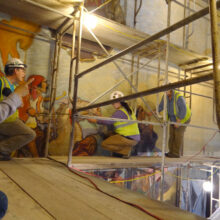 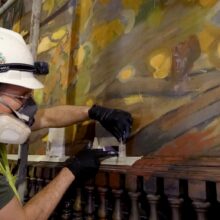 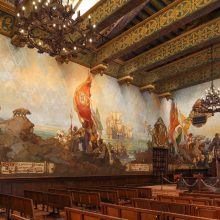 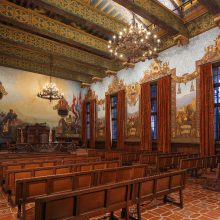 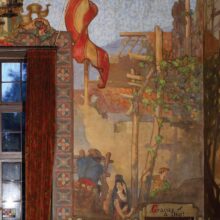 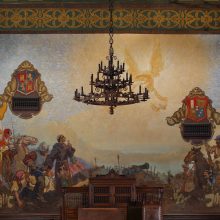 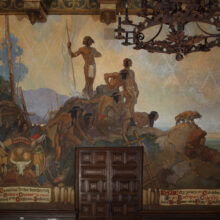 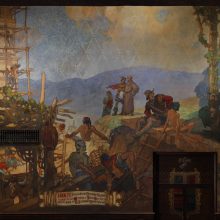 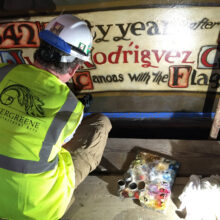 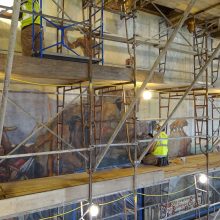