The Seattle Asian Art Museum (SAAM) exhibits contemporary artworks from China, Korea, Japan, India, the Himalayas, and other Southeast Asian countries, and it is located at Volunteer Park in the Capitol Hill neighborhood of Seattle, Washington. Beyond its collection galleries, the museum has community spaces which include an education center, conservation center, and library. During SAAM’s expansion, the Art Deco building  (which originally housed the main collection) underwent extensive work. After a two-year-long restoration, the SAAM reopened to the public in 2020.

The work at SAAM was completed as a three-phase project to including work on the scagliola, cast travertine, and the gilded terracotta trim in the entrance, and Fuller Garden Courtroom.

Our team was responsible for the testing, documentation, submittals, and removal of the scagliola panels for structural work; scagliola, travertine, terracotta, and mosaic fountain work. The scagliola appeared to be unique in that there was no fibrous reinforcement in the original manufacturer. This unforeseen condition was not discovered until we started to remove panels and, rather than coming down as single units, they shattered due to this lack of reinforcement, often a burlap skeleton. It is believed that this was a flaw in the original manufacturer. Given that the building was being seismically upgraded, we proposed applying fiberglass reinforcement to the rear of each panel that way if there was a seismic event, it diminished the risk of the panels shattering and falling into pieces from the wall.

EverGreene completed mobilization for the new travertine openings, salvaging the travertine. Testing the cleaning methods for the travertine and execute mock-ups of the travertine repair for approval was completed as well as execution cleaning and one pass aqueous cleaning. Repairs were completed, regrouting joints and filling holes were accomplished.

Our craftspeople completed work on the scagliola, travertine, terracotta, and mosaic fountain. Following the survey of the scagliola, a piece of the original was brought to our studio where the color was matched through a technique known as “breaking the code.” This step is crucial to know what materials to use for repairs and replacement units. Document all lettering and make a rubbing of the raised letters, and removal of all lettering, hand-rails, etc., and re-setting loose panels, for gilding work. After all, repairs were made, cracks filled, and panels set, three layers of polishing commenced to create the marble feel. Hardware lettering was then re-installed. 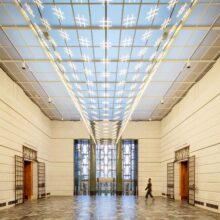 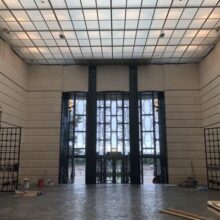 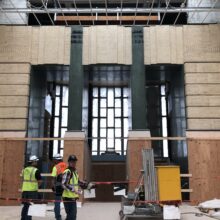 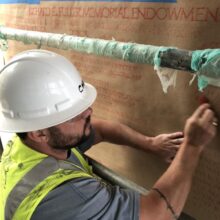 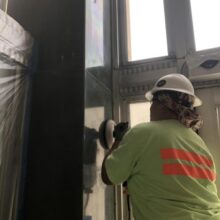 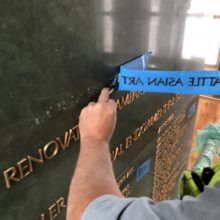 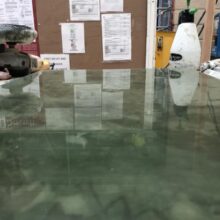 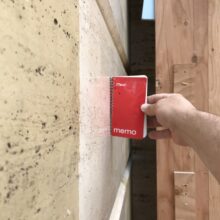 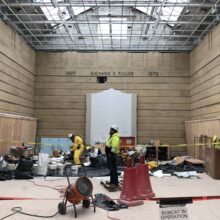 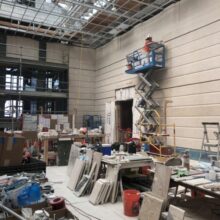 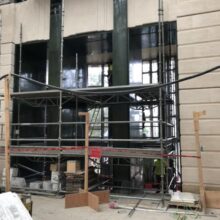 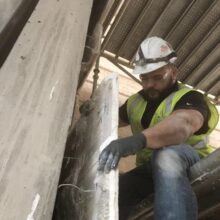