The development of radar constitutes a major milestone in modern technological and military history. Research by several prominent physicists led to the construction of the XAF radar in 1938, which became the first radar mounted on a naval vessel. The radar consists of three riveted aluminum box beams, creating a U-shaped frame, which supported the aluminum truss radar screen. This assemblage is carried on a pyramidal base, framed in steel tubes covered by sheet steel plates. Upon dismantle from the battleship, the radar was displayed in several high-traffic outdoor locations, during which time the artifact sustained significant deterioration. Aggressive corrosion of the aluminum had caused exfoliation or total loss through the metal. The steel tube framework of the base had rusted significantly, causing metal to be lost. Successive coats of white paint had failed completely and the cable mesh of the radar screen was compromised and abandoned.

We were contracted in 2009 to conserve the XAF radar. The radar was initially cleaned using high pressure (>25,000 psig) water-jetting to safely remove paint, corrosion, and salts at an off-site facility. Major areas of loss or compromised aluminum were carefully cut out and repaired with sound aluminum angle or sheet. Smaller losses and joints were filled with automotive body filler and sanded smooth. Non-original supports in the steel base were removed to facilitate repair and replacement of the original tube framework. The radar was treated with aircraft-grade metal brighteners and corrosion inhibitors to stabilize the metal surfaces. All surfaces were painted with a high-quality system of industrial finishes in a historically appropriate shade of “battleship gray”. 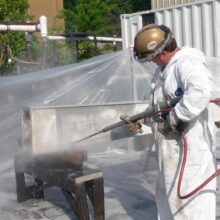 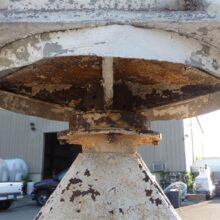 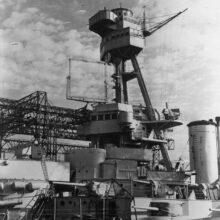 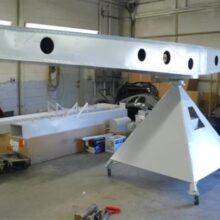