The Sterne Fountain was commissioned by the Sterne family in 1924, a prominent family in Littleton, Colorado. The fountain was designed by Jacques Benedict, a l’École des Beaux-Arts educated architect working in the American west. The fountain consists of a central square column topped with a decorative urn, flanked by two low wings bearing a dedication to the Sternes’ daughter, who died at a young age. A cast lion overlooks the fountain basin. Moved from its original location to the War Memorial Rose Garden in 1988, it now faces a park named for another Sterne patriarch.

The fountain had been subjected to the harsh environmental extremes of the climate of Colorado since 1924. Atmospheric soiling had accumulated, mortar joints had opened, and previous inappropriate repairs had failed. The cast stone exhibited extensive surface delamination as well as sizable dimensional losses.

We were contracted to perform an assessment of the fountain, including a brief survey of the water feed lines. Based on the conditions, a treatment plan was developed. The fountain was then cleaned with gentle detergents and biocides to reduce atmospheric soiling and biological growth. Micro-abrasion, using a fine-milled glass, was used to remove the remaining soiling and hard water deposits. Mortar joints were cut out and re-pointed with an appropriate pointing mortar. Detached pieces of cast stone which were considered salvageable were reattached using a combination of a lime-based adhesive and mechanical pinning. Cracks and fissures were grouted to prevent moisture infiltration. 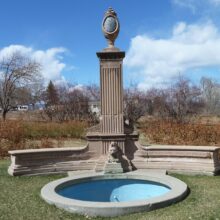 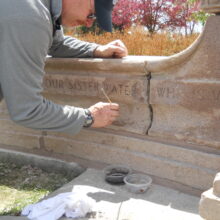 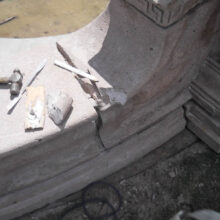 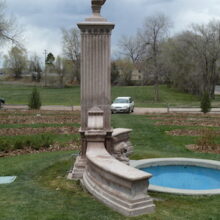