Several examples of modern sculptures by native artists are installed within the buildings and on the grounds of the Swiss Embassy complex in Washington, DC. Cast or fabricated of bronze or steel, the modern designs reflect 20th century abstract concerns by Swiss sculptors. These include biomorphic forms in Eurythmie, kinetic art in Windpendel, and mechanical and Surrealist references in Orbit.

In preparation for a major reconstruction of the grounds, the Swiss Embassy contracted us to remove the sculptures from site where necessary, conserve them, and store them until they could be returned after construction was complete. The works that were to be removed were hoisted from the site using mechanical equipment and brought to our studio. Eurythmie was treated on-site.

The steel works were cleaned of failed coatings by blasting to bright metal before being treated with a high performance three-component coating system. The top-coat was color matched to the original. The bronze was cleaned by waterjetting, re-patinated, and lacquer-coated. After storing the other works for almost a year they were returned to the Swiss Embassy for reinstallation or return to their native land. 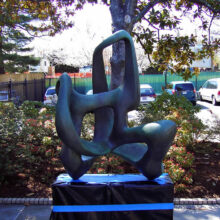 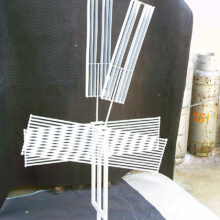 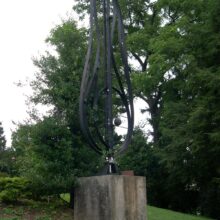