Chattanooga National Cemetery was created to commemorate the battles fought there during the U. S. Civil War. Since then, it has become the only national cemetery in which foreign POWs from both WWI and WWII were reinterred. Integral to its design, the late 19th century monumental masonry archway would have originally functioned as the formal entrance. It is one of five southern national cemeteries to feature this structure.

The limestone arch suffered typical deterioration for its age. This included stone and mortar loss with 100% joint failure in the attic and cornice area, and 60% failure in the lower portions. The attic and arch base had also accumulated thick biological soiling in addition to the atmospheric soiling on the limestone. The attached iron gates showed failed and ineffective repairs.

We were contracted to perform the stone cleaning, repairs, and re-pointing, working with a subcontractor to fix and refinish the iron gates. Through testing, an effective but sensitive process was developed to provide a general cleaning, as well as to remove the carbon soiling, tar, and paint. Failed mortar joints were re-pointed, using a closely-matched mortar, and all skyward-facing joints in the attic and cornice were protected with lead T-caps. Stone repairs were performed through grout injection into existing cracks, and by patching areas of significant deterioration/loss. Previous poorly executed weld repairs on the iron gates were ground and re-welded, and missing or bent hardware was replaced before the entire assembly was repainted using a high performance system. 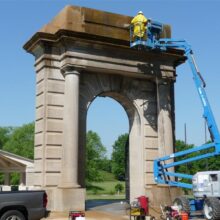 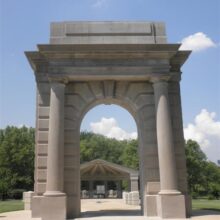 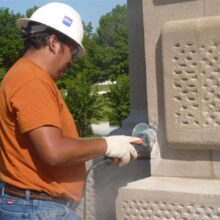 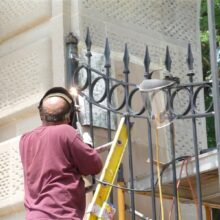