The Bob Hope Theatre (originally Fox California Theater) was designed as a movie palace by Balch & Stanberry and opened its doors in 1930. The original colors in this fantasy movie palace, which drew on Spanish Renaissance and Baroque palace architecture, had clearly shifted away from the 1930s palette. Metallic finishes were tarnished and some of the distinctive patterns had been painted over. EverGreene restored the interior décor of this historic theater to its original appearance and reconfigured the production facilities for touring live theater.

In Stockton, California a turning point in downtown revitalization efforts was reached with the reopening of the former Fox California Theatre. Renamed in honor of Bob Hope in 2004, the theater reopened on its 75th anniversary after an $8.5-million renovation that restored the interior décor to its original appearance and reconfigured the production facilities for touring live theater. It was decorated by Anthony Heinsbergen, an outstanding theater decorating company of the period. The original colors in this fantasy movie palace, which drew on Spanish Renaissance and Baroque palace architecture, had clearly shifted away from the 1930s palette. Metallic finishes were tarnished and some of the distinctive patterns had been painted over. EverGreene’s conservators and artists prepared a Historic Finishes Study, which included exposure windows.

The findings of the investigation and lab work were presented in an illustrated report to Wenell Mattheis Bowe and the City of Stockton, and used by the architect to prepare specifications for decorative painting. The beamed ceiling and huge brackets, richly decorated wood-graining, stenciling, and gilding, are the most impressive features of the theater. Beams and ornamental plaster moldings, brackets, cornices, and frames were preserved and repaired. During the demolition phase, asbestos-containing plaster was removed from flat areas of the ceiling between beams. Specifications called for replacement with drywall, which was then given a sprayed-on stucco texture to match the original appearance. The reinstatement of the historic color palette and decorative painting scheme began with a series of mockups. The ceiling, brackets, and cornices received a wood-grained finish, stenciling on beams, polychromy on relief patterns, and gilded highlights at edges and lines. The ornate patterns of the proscenium arch and columns glow with polychromy, glazing, and gilding. Dutch metal composition leaf was applied on pin lines and long runs. Original hand-painted figurative decoration above the proscenium with images of horses was preserved by cleaning and conservation treatment. The starry sky above the proscenium was repainted to its original base color with multicolored stenciled stars. In the arches below the cornice, shields were hand-painted over the plaster walls to replicate the original designs.

Prior to restoration, the lobby had an unappealing mix of inappropriate colors, overpainted patterns, and tarnished finishes. The original color palette and finishes were reinstated, restoring the correct balance of contrasts, patterns, and highlights. Among the most noticeable improvements are panels of motifs between the brackets above the cornice, which were repainted, based on exposure windows. Decorative plaster columns and pilasters received a rag roll glaze on shafts and metal leaf on the zigzag stripes. 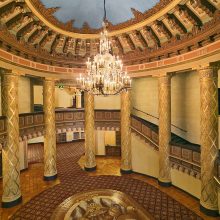 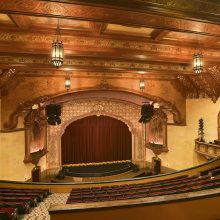 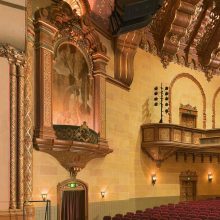 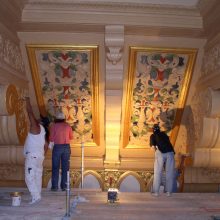 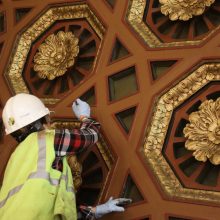 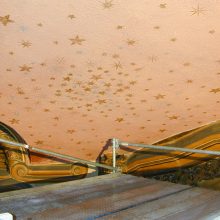 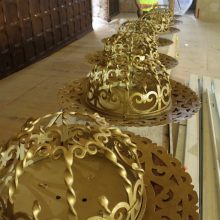