Awards
Louise Bourgeois' The No March - EverGreene
Skip to content

Louise Bourgeois' The No March

The No March by Louise Bourgeois consists of more than 1,000 marble cores standing in wave-like rows that swell in height as they crowd into a corner. First exhibited at the Whitney Biennial in 1972 without any mountings, the cores were simply arrayed on the floor by the artist. After it was acquired by the Storm King Art Center, the sculpture was mounted on a raised platform substantially changing the artist’s original intended effect. Over time the marble pieces became soiled through exposure to the weather and visitors’ inquisitive touches.

In 2005 we were contracted to perform a thorough treatment of the work which included removing the mounting system, cleaning the marble elements, and remounting all cores in a manner more consistent with the original installation. The greatest challenge was to maintain the exact location and orientation of each stone during the work.

After being transported to us studios, each stone’s exact location was carefully documented, mapped, and tracked in an inventory method. The stones were cleaned with detergents, anti-microbial biocide, and gentle pressurized water. The mountings were modified to the new system and the cleaned and treated marble cores were then installed on aluminum plates colored-matched to the gallery floor. The methodical remounting of each stone required more than six weeks of full-time effort by our conservators and technicians. When complete, the entire sculpture was protected and trucked to the Art Center, reinstalled, and exhibited for the first time in more than 30 years as the artist intended it. 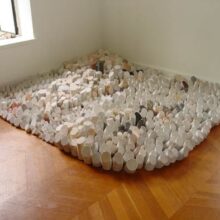 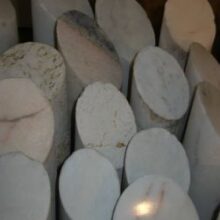 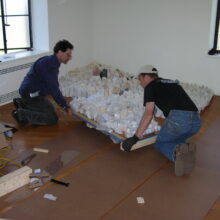 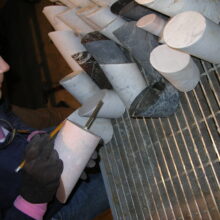