Our conservation team was contracted in 2006 to treat these two ship’s service items, a water boiler and a milk scalder, which were recovered in 2000 and 2004 respectively. The artifacts were desalinated over a period of several years. Final treatment included cleaning, stabilization, coating with a protective lacquer, and design of a suitable mount for display. We designed these mounts to be independent of the artifact, allowing the mount to travel separate from the artifact and placed onto the mount at the time of exhibit. There are no brackets securing the artifact to the mount; the Lexan® base was cut to fit just inside the diameter of the underside of each tank and cut or drilled to fit around protruding elements on the underside, such as bolt heads and pipe fittings. The Lexan® dowel legs were cut to a length that would allow the mount to set into holes pre-cut into the wooden display platform. 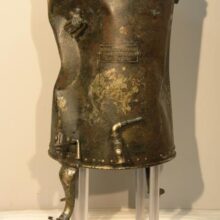 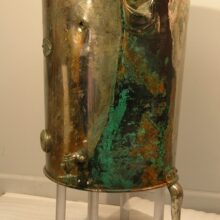 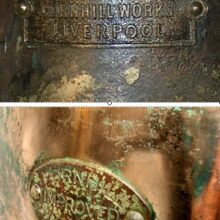