After recovery in 2000, the window was desalinated over a period of a year and placed on display. Despite the violent damage that tore away one side of the bronze frame, the 1-inch thick glass was broken but in place, original painted finishes were intact, and both casement and transom hinges functioned. However, travel and display of the 250 pound artifact posed potential risks to its preservation.

In 2006, our conservation team was contracted by Premier Exhibitions, Inc. (formerly R. M. S. Titanic, Inc.), the salvor-in-possession, to design and fabricate a travel/display frame that would minimize handling of the artifact when crated and uncrated between traveling exhibits, and minimize the number of attachment points which could potentially stress the object.

An offset powder-coated steel frame with detachable base proved to be the most adaptable mount for the window. Constructed using square and round tube for strength, the frame is set apart from the window, with contact occurring only at the fasteners. Attachment to the mount utilized existing bolt holes in the window frame; Teflon® washers were used to isolate the dissimilar metals. A wide diameter wheel shaped base provided a large footprint and added stability for display. 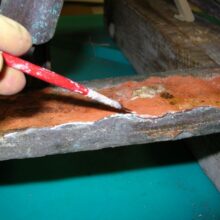 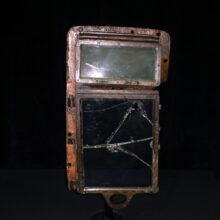 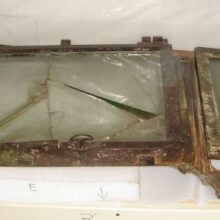 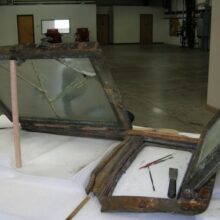 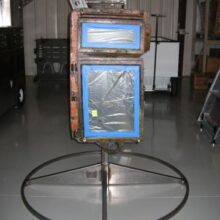