The U.S. Department of Commerce Building was constructed in 1932 at the intersection of 14th Street and Constitution Avenue, NW, spanning three city blocks. The building was renamed the Herbert Clark Hoover Building in 1982 to honor President Hoover, who served as Secretary of Commerce during the 1920s. All of the twelve arched entrances to the building are enclosed with a set of majestic bronze gates, each of which weigh more than 4,500 lbs. After more than seventy years of continual service the gates needed major rehabilitation.

Our conservators performed a condition assessment, which revealed that the twenty-four gates suffered a combination of corrosion and deterioration of the beautiful bronze surfaces and failure of all of the hinge and lock works. Many of the gates were immobile, frozen in place by the advanced level of deterioration of their unique assemblies. Working closely with the client to maintain security at the building, each gate was removed in sequence and transported for treatment to us’s conservation studio.

After thorough documentation of the conditions, work included washing and detail cleaning to remove corrosion and soiling. Missing and damaged elements were repaired or re-created with new bronze castings. New bearings and hinges that matched the originals were custom-made and mounted to the gates. Adjustments to the patina were made and then all surfaces were coated to protect them from further deterioration. The gates were then wrapped, transported, and reinstalled into their original spaces. In addition to their restored appearance, the once frozen multi-ton gates now swing with the pressure of a single finger. 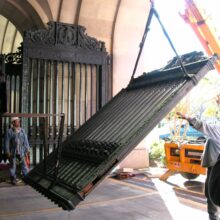 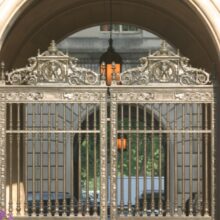 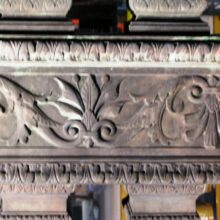 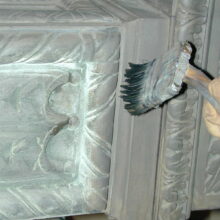