During renovations, it was determined that the ceiling in its original state needed some work. EverGreene was contacted to help restore the ceiling to its former glory and become a strong focal point in the lobby. EverGreene’s scope of work started with surveying and documenting the ceiling. Once the areas in need of work were clearly defined, our team of conservators got to work on aqueously cleaning the entire ceiling. Areas that had heavy salting were desalinated using a poultice, loose paint was consolidated and some paint flakes were re-adhered where appropriate. A piece of spalled concrete salvaged by the client was re-adhered using epoxy to fill in any areas where material was still missing. The final step was to apply a matte, UV light stable varnish to the entire ceiling to help form a barrier between the existing ceiling and the treatments performed by EverGreene. 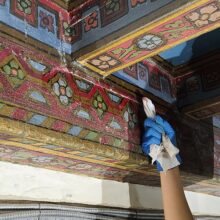 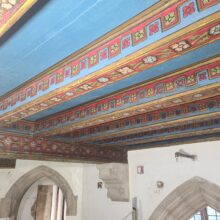 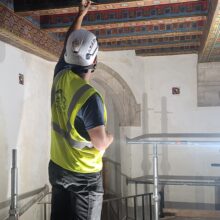 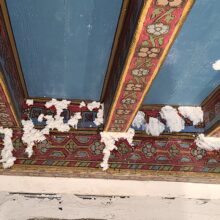