The Soldiers and Sailors monument was erected in 1891 and was dedicated to the heroic citizens of Watertown who fought in the Civil War. The granite monument is approximately 50 feet tall upon a raised earthen berm, and consists of an allegorical figure of Victory atop a column with decorative capital, plinth, and base. The monolithic die is adorned with commemorative bronze plaques on the east and west elevations, and by a cast bronze soldier and sailor on the north and south sides, respectively.

The monument was beginning to show visible deterioration, commensurate with its age and location. Bronze elements were marred by disfiguring black and green streaking. The base showed evidence of open joints and water infiltration, accompanied by biological growth and calcium carbonate deposits. Cracks, uneven soiling and metallic staining were also observed.

We were contracted in 2009 to perform a condition assessment of the monument. The objectives of the assessment were to document the conditions of the monument, make recommendations for its conservation, and provide a budgetary cost estimate for the recommended work. The monument was assessed both from ground level, as well as from the aerial platform of a fire truck (provided and operated by the City). The monument was monitored with a transit level, which indicated it was not leaning in any direction. Recommendations for treatment included re-pointing the joints with lead wool, re-setting a fractured stone, carefully removing metallic stains, and treating the bronze elements through a series of cleaning, spot-patination, and waxing.

In 2012 we were contracted to perform conservation treatment based on the recommendations provided by us in 2009. The goal of the treatment was to clean, stabilize, and repair the monument. The treatment included overall and detail cleaning, including selective poulticing and micro-abrasion of metallic stains. Failing and open mortar/lead joints were refilled to match the existing material. A large stone fragment displaced through point-loading was reset and pinned in place. The bronze figures and plaques underwent treatment to reduce active corrosion. The bronzes were spot-patinated as needed to establish consistent coloration overall, and treated with multiple coats of hot and cold-applied wax. The sailor’s missing cutlass blade was fabricated, installed, and finished to match the other figures. 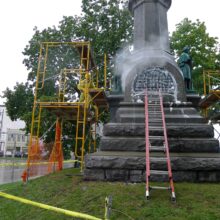 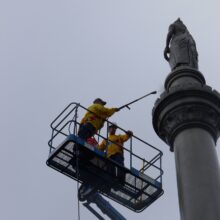 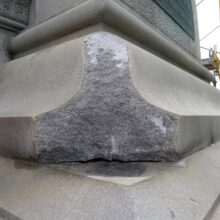 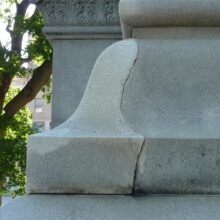 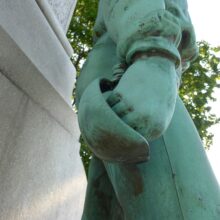 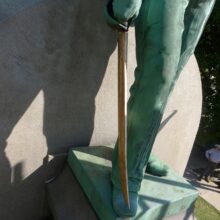 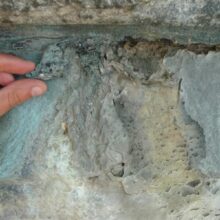 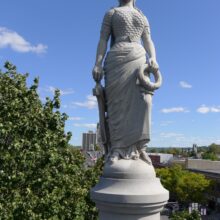 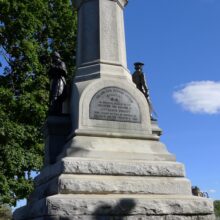 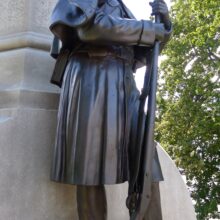 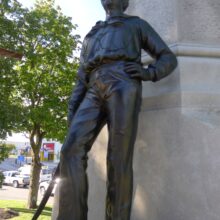 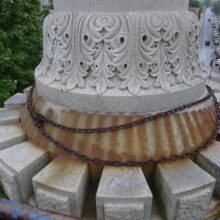 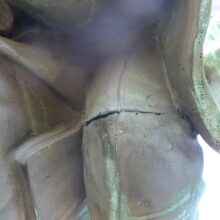 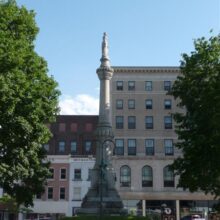 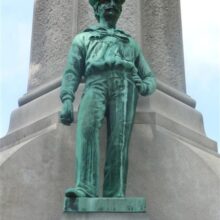