The White Island Lighthouse is one of the many historic lighthouses that were built along the Eastern Seaboard to guide shipping away from shoals and dangerous rocks near the coast. Guarding the entrances to Portsmouth harbor, the White Island Lighthouse is the only lighthouse on New Hampshire’s narrow stretch of the ocean. Built on a rocky island in 1859, the brick tower and adjacent keeper’s house withstood more than a century of buffeting by North Atlantic storms until decommissioned by the coast guard. The Lighthouse is listed on the National Register of Historic Places.

The light is a Fresnel lens within a strong cast iron and glass lantern that is perched atop a double wall brick tower. The tower is an intriguing construction designed to withstand successive poundings by the hurricane driven surf. The concentric drums were designed to move independently, producing the stability of the larger drum’s footprint while allowing it to absorb impact and possible damage without distressing the inner drum. While this design proved successful at resisting the relentless pounding of the surf, the lighthouse has not survived its long exposure without damages.

One of our senior conservators collaborated with a team of engineers and architects to assess the conditions and provide treatment recommendations to preserve the historic structure. On-site observations were augmented by laboratory studies of the bricks, mortar and renders. Based on the finding, a series of recommendations were developed to treat the observed conditions. 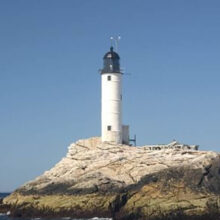 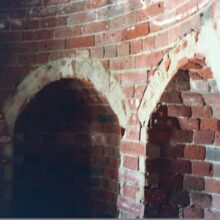