Opened in 1889, in the wake of Chicago’s great fire, the Auditorium Theatre, designed by the firm of Adler and Sullivan, has had many incarnations from hosting live performances to serving as a bowling alley and servicemen’s center during World War II.

EverGreene began its work on the Theater’s restoration in 2001 by preparing a comprehensive historic finishes study of the Auditorium to determine the original color scheme. The study included archival research and an investigation of the existing finishes. Color boards and mock-ups were created for review prior to implementation. Six stories of scaffolding were erected for the restoration and conservation of Charles Holloway’s mural, which stretches across the proscenium. Our conservators cleaned the mural and applied an isolating varnish to protect the original. We also stabilized the ornamental plaster on the proscenium reducer curtain. The decorative ceiling was newly painted, and 16,000 square feet of missing gold-leaf gilding and stenciling was applied. The Theater’s decorative plaster and scagliola columns were repaired and refinished, and improvements to the lighting system recommended.

Today, the spectacular 4,200-seat Auditorium Theatre hosts a variety of live music, dance and other events every year for audiences that appreciate the Theater’s beauty as well as its wonderful performances. 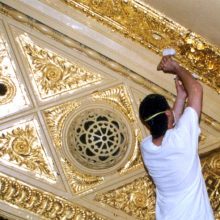 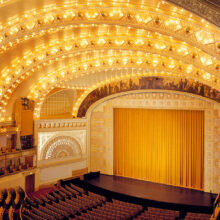 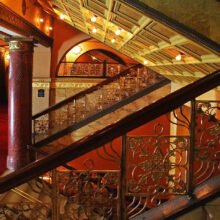