The August Bloedner Monument is a significant memorial originally located in Cave Hill National Cemetery in Louisville, Kentucky. It honors the fallen soldiers of the 32nd Indiana Volunteer Infantry Regiment at the Battle of Rowlett’s Station, fought near Munfordville, KY on December 17, 1861. Wishing to honor his comrades, Private Christian Friedrich August Bloedner designed and constructed a monument, completed in January 1862. It is the oldest surviving memorial to the Civil War.

The monument consists of two sections of carved limestone stone. The upper portion is reportedly Ste. Genevieve, while the base is Indiana or Bedford limestone. Originally located on a hillside 10’ from a roadway, the monument deteriorated rapidly over the course of 140 years of exposure. Severe spalling and delamination of the stone surface developed due to freeze-thaw action. Deterioration led to significant loss of detail and rendered the inscription nearly illegible. Conditions became so dire that a temporary enclosure was built over the monument in an attempt to stave off total loss.

In 2008, we performed an inspection of the monument to determine the feasibility of moving the pieces, and recommended treatment to address conditions. Based on findings, the client rendered the monument too significant and fragile to remain outdoors. We developed a comprehensive plan for relocation, treatment, and re-mounting of the monument, and designed, fabricated and installed a custom lifting frame. The monument was relocated to an indoor facility where it underwent conservation treatment including cleaning, repairing spalled surfaces, removal of failed patches, and installing new patch repairs. The monument was remounted for future display in a museum setting, designed specifically to accommodate temporary protective crating and to allow easy relocation of the monument with a forklift in the future. 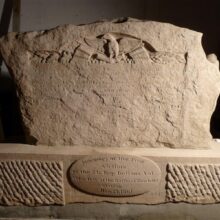 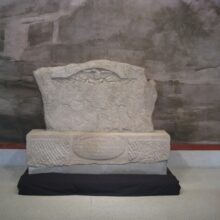 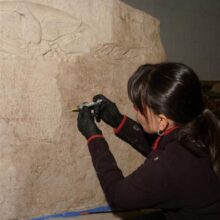