The Nancy Lee and Perry R. Bass Performance Hall opened in Fort Worth in May 1998, as a direct response to severe acoustical and logistical issues identified during the Fifth Quadrennial Van Cliburn International Piano Competition. In the late 1980s, several ideas were proposed to create a performing arts space suitable for the area; however, due to severe local economic problems, the project was put on hold for a couple of years.

In March 1993, Bayard H. Friedman lead a $60 million Capital Campaign, and two years later, General Campaign was launched, breaking ground for the new performance venue. In May 2001, the space was finished in time for full use of the Eleventh Van Cliburn International Piano Competition. This multi-purpose facility houses the symphony, ballet, opera, stage, musicals, and rock concerts, as well as children’s educational programming.

In collaboration with David M. Schwartz Architects, EverGreene artists painted the wreath of feathers and sky mural directly on the plaster of the dome. We also painted the Domes in the East and West Lobbies. Our muralists brought these pieces to life from the design of Texan artists, Stuart and Scott Gentling. The 80-foot-diameter Great Dome is the pinnacle of the concert hall, soaring 90 feet above the floor. Our craftsmen also gilded highlights of the plaster moldings throughout the auditorium and lobby and completed murals and decorative paintings in the public areas. 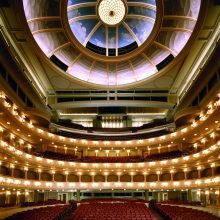 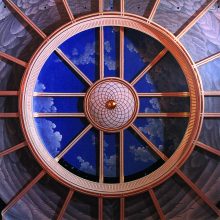 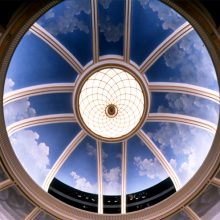 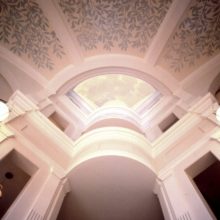 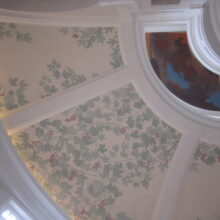 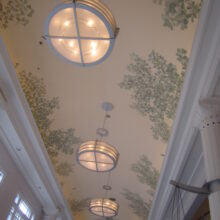