We were contracted to carry out the treatment of the World War II Belgium Gate beach obstacle from the National Army Museum in Fort Belvoir, VA. The gate, also known as a Cointet-element or C-element, had been constructed as part of the Belgian defences against a German assault prior to WW II. After the fall of Belgium many were relocated throughout Europe to resist Allied attacks, including in Normany, where this unit was taken from. Treatment of the 12 steel pieces included the removal of existing soiling and corrosion, the stabilization of the metal surfaces, and an application of a protective wax coating.

Conservation treatment was carried out in our studio in Forestville, MD between February and June of 2016. Each of the 12 pieces was cleaned, treated with a corrosion conversion solution, rinsed, dried, and coated with a custom formula of wax to protect the pieces from moisture incursion.

Upon completion of the project, a full report of all treatment steps, including photographic documentation, was submitted to the client. 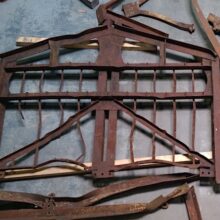 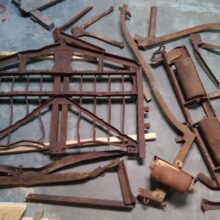 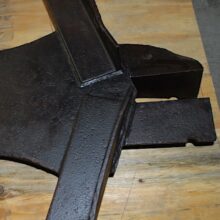 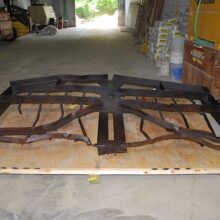