Beverley Mill (or Chapman’s Mill) was built in 1742 by Jonathan and Nathaniel Chapman, father and son business partners from a prosperous colonial family. The stone mill, which stands six and one-half stories tall, is believed to be the tallest gristmill in the United States. In October 1998 the mill was devastated by a fire set by trespassers. The fire destroyed the roof and all interior wood framing, leaving only a charred masonry shell. In addition to the tragic loss of the fully intact machinery, the four exterior walls of the structure suffered substantial damage. This caused hazardous conditions, with lintels and sills shattered and at risk of collapse, and countless sharp shards hanging throughout the interior walls.

We worked with the client to develop strategies to preserve the structure as a ruin, while working within their stated goals and projected budget. Cintec America was engaged to stabilize the structure using their internal anchoring system. Lintels, sills, and corners were “stitched” with internal anchors to minimize the visual impact.

Initially, the intention was to complete the stabilization of the south elevation with masonry filling and grouting using lime mortars and to progress around the structure as funding became available. Eventually, the scope of work was expanded to include an emergency stabilization of all four facades to ensure that the structure would remain standing long enough to be adequately preserved. All window and door openings were shored, and all wall tops, windowsills, and ledges were capped with lead sheet to prevent the infiltration of water. The most vulnerable window headers at the top floor level were rebuilt or disassembled to prevent collapse. 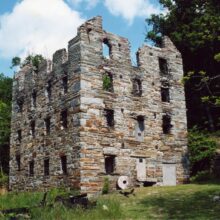 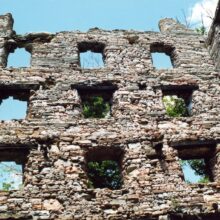 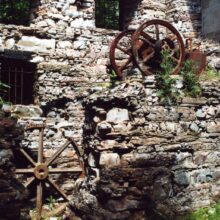 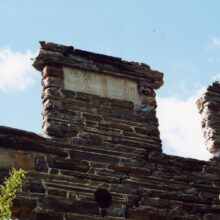