Chief Manuelito served as an important Navajo leader in the mid-19th century against the encroachment of the U. S. Government. Kit Carson’s scorched earth campaign left many native people starving though until they were forced to turn themselves in. Throughout this period, Manuelito led attacks and remained among the last to surrender. He remained a popular leader, advocating for perseverance in the native culture and advancement through education. He is represented here by the artist Hermon Atkins MacNeil, who created several other notable sculptures of Native American subjects and themes.

The Chief Manuelito sculpture was created using wood, plaster, and paint. Past cleaning efforts had caused significant damage. Cracks in the gypsum and plaster layers were associated with the movement of the wooden armature. The sculpture had areas of loss, and areas of visible previous repairs.

We were contracted to perform the sculptures’s plaster and paint conservation treatment. After the condition assessment, paint samples were collected and investigated to develop the earliest color compositions, likely paint scheme, and pattern of the blanket. Treatment of the sculpture itself proceeded in three parts: structural stabilization and integration of new base and support components, consolidation and repair of deteriorated decorative plasterwork, and paint removal along with repainting where needed. We also provided guidance for the display of the sculpture, and a maintenance plan for its continued preservation. 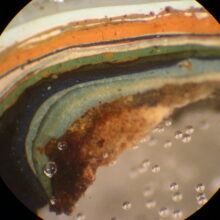