The Colonial Theatre complex is the largest of several mixed-use blocks that were built in downtown Laconia, New Hampshire in the early twentieth century. The complex includes three sections: the Piscopo Block, Canal Street Annex, and the Colonial Theatre. The Colonial Theatre was opened in 1914 by Benjamin Piscopo. George. L. Griffin, a local architect, was chosen to design the building in the Neocolonial style. Piscopo commissioned three murals by artist P. Holdensen to adorn the plaster around the stage. Originally from Venice, Piscopo also commissioned the creation of a hand painted fire curtain with a Venetian scene depicting the city as seen from the water.

When the 1,400-seat theatre opened, it showed a mixture of stage shows, photoplays, and vaudeville. With the decline of vaudeville in the late 1920s/early 1930s, the theater transitioned to primarily showing motion pictures. It acted as a single screen theatre until 1983, when the balcony and orchestra sections were divided into four separate screens with a fifth screen in the former stage area. The theatre finally closed in August 2002 and sat vacant for over ten years. In June 2015, the city of Laconia announced a partnership with Belknap Economic Development Council to purchase and renovate buildings in downtown Laconia with the intention of revitalization; the Colonial Theatre was one of many buildings included in the scope. The theatre was listed on the National Register of Historic Places in 2020 as a contributing structure in the Colonial Theatre Complex District.

Our team worked to conserve as much as possible of all the finishes. The Holdensen murals were treated by our conservation team: general cleaning, repairing canvas tears or holes, reattaching delaminated canvas, applying an isolation varnish, inpainting where required, and sealing with a finishing varnish. The fire curtain was also treated by our conservators: cleaning general soiling from the surface, as well as repairing and patching any canvas tears or holes.

The ceiling and wall decorative finishes were cleaned and consolidated where possible and recreated where necessary. Flat finishes were recreated and cut in around any historic stencils. Any required plaster repairs were also performed by our craftspeople. The underside of the balcony has since been painted over and required the EverGreene Design Studio to replicate the design. The decorative edging was printed on canvas at the design studio and was installed on site. The bead and reel pattern was stenciled accordingly after the canvas installation was complete. 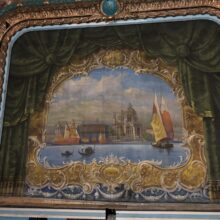 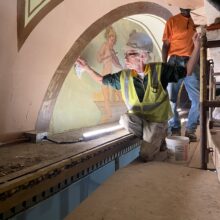 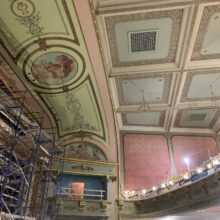 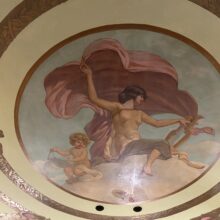 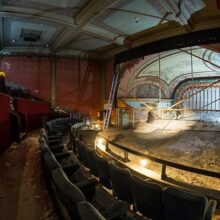 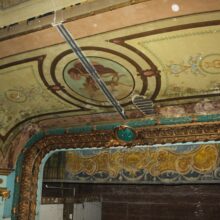 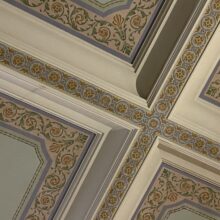 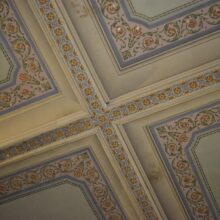 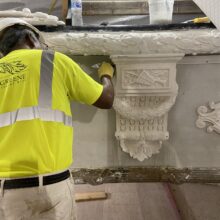 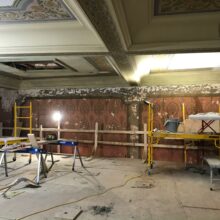 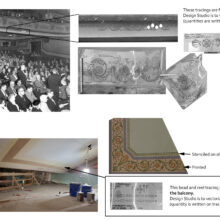 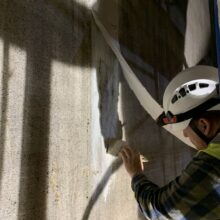 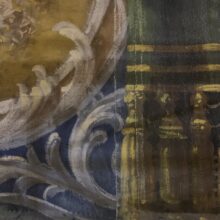 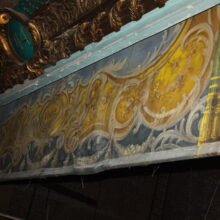