The De Anza Motor Court was constructed in 1939 by Charles Garrett Wallace on Route 66 (Central Avenue) in Albuquerque. Originally executed in Pueblo-style adobe, restorations completed in 1950-51 obscured many of the building’s distinguishing architectural features to create what at the time was considered a new and modern appearance.

Wallace’s most significant addition to the De Anza Motor Court in the 1950s was a private basement banquet room featuring two oil based, polychrome 20’ x 4’ Shalako murals on plaster, by Zuni artist, Tony Edaakie, Sr. Trained by Clara Gonzales in the 1920s, Edaakie is considered one of the major artists of 20th century Zuni painting and lapidary arts. As these Shalako murals, while subtly altered for non-Zuni viewers, are quasi-religious in nature, viewing of such work by non-Zunis requires educated, informed respect.

At the request of James Kraft of Unified Arts, we assessed the construction design, materials and conditions of the murals in collaboration with Steven Prins & Company. The report incorporated the results of the findings from that investigation which included the materials and methods of construction, their conditions, the causes of deterioration, and recommendations for remediation, protection, and conservation treatment. The report also included budgetary costs estimates for the work and a list of qualified contracts to undertake the work. 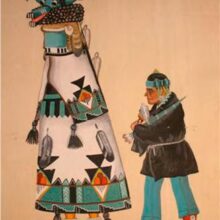 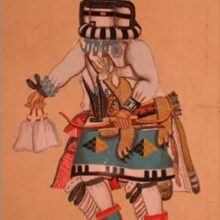 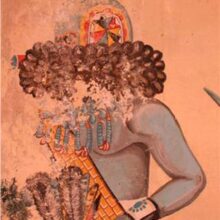 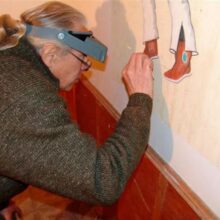 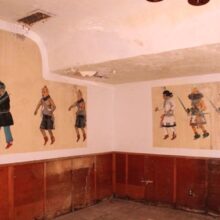