The Miami estate of Industrialist James Deering was built around the owner’s collection of antiquities and art objects. Each room was designed to provide a theatrical experience of the collection of European antiques while enforcing an imaginary tale of the age and significance of the site and its maker. Deering’s sitting room, where he conducted business of the International Harvester Corporation, had numerous French Empire furnishings that the estate’s designer, Paul Chalfin, no doubt intended to reinforce the association of this captain of industry with the Emperor Napoleon.

Among damage that Hurricane Wilma inflicted on Vizcaya in 2005 was exposure of the metals in Deering’s sitting room to corrosive salt spray when the windows facing Biscayne Bay blew open. Within a short period of time fragile and vulnerable gilded ormolu fittings, silver, and other metal artifacts began to oxidize and corrode. The condition was made particularly difficult by the interrelation of the metals with a variety of substrates like mahogany and gesso.

We were contracted by the museum to assess the condition of the metals in the room and recommend treatments for each. All metal artifacts were studied, documented, and assessed. Chloride readings were taken to confirm the continued exposure of the metals to airborne salts. A means of cleaning and restoring each artifact was recommended which the museum has used as a guide to conserving these pieces. 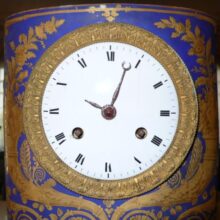 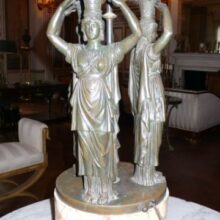 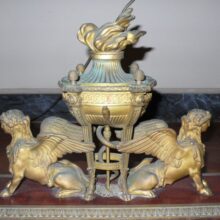