A former movie theater and 2,800-seat concert hall nowadays, the Fox Oakland Theater originally opened in 1928, running films until 1970. The historic venue was designed by the San Francisco architectural firm Weeks & Day in an eclectic style that includes Indian, Moorish, and Medieval elements. By 2007, water infiltration and a fire had contributed to the significant deterioration of the plaster and decorative painting.

EverGreene conducted a historic finishes investigation to identify the designs and color palette of the original decorative scheme as well as performed a plaster assessment. Our craftsmen began the restoration work by stabilizing the plaster ceiling, including repair and reinforcement of tie wires and installation of turnbuckles. The plaster and decorative painting in the auditorium were restored and repainted in an elaborate polychromatic faux wood-grained design. Starbursts, acorns and other elements were polychromed with gold, copper, and aluminum metallic paint, along with 15 additional colors.

In the halls, cornice plaster molding that had been lost was replicated and reinstalled. The grand lobby and mezzanine lobby required plaster restoration, as well as cleaning, conservation, and inpainting of the stenciled ornate ceilings. 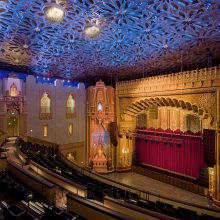 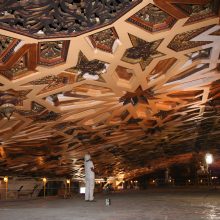 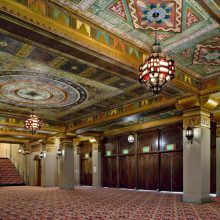 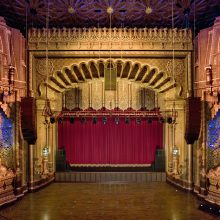 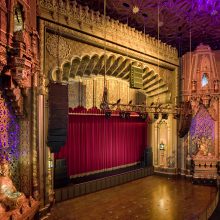 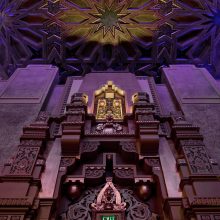