Hudson County Courthouse, also known as Justice William J. Brennan Jr. Courthouse, (c. 1910) is one of America’s great early twentieth century courthouses. Its grand Beaux Arts exterior hints at the highly ornate decoration that lies within and truly is a depositary for some of the greatest murals of the American Renaissance. The murals and decorative painting were designed and executed by the leading muralists of the day, assembled together by Francis D. Millet, the director of decoration at the Columbian Exposition at the 1893 Chicago World’s Fair. They included Kenyon Cox, Edwin Blashfield, Charles Yardley Turner, Howard Pyle, and of course, Millet himself.

The courthouse served as the seat of Hudson County’s justice system for 56 years before it was abandoned in 1966. Archival research and microscopic analysis indicate that the courthouse has undergone multiple restoration campaigns over the course of the last 40 years, often launched in response to severe weathering and deterioration that have distorted the intended appearance and unity of the interior elements. Fortunately, a tremendous amount of physical and archival evidence of the courthouse’s original appearance survives; its interior can be easily
revived.

In order to develop a comprehensive approach for the restoration of the Hudson County Courthouse, EverGreene studied, tested, and documented the conditions of the historic canvas, paint, murals, and plaster finishes in March and April of 2012. The goal of this investigation was to develop an understanding of how the finishes historically worked together and to provide recommendations for their restoration. Our team returned in late 2019 to complete additional restoration services for the historic ceiling murals. 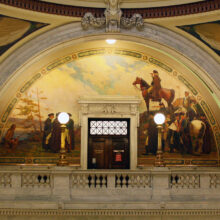 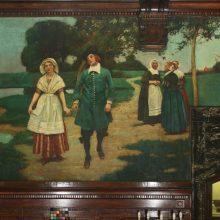 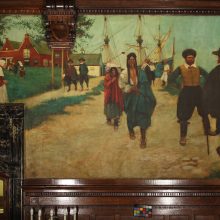 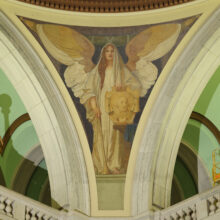 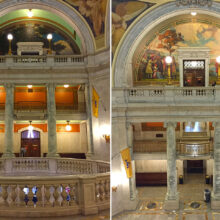 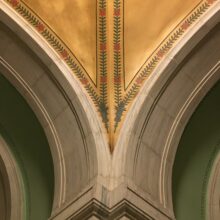 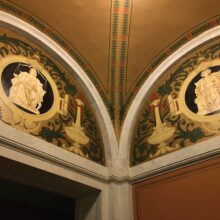