The F-1 Engine Prototype was initially developed by Rocketdyne in the late 1950s for the United States Air Force to meet a requirement for a very large rocket engine. It is one of the only two high-fidelity prototypes in the country. Although the Air Force halted the engine development, the newly-formed National Aeronautics and Space Administration (NASA) recognized the utility of the engine and contracted Rocketdyne to complete the F-1. It served as a catalyst for many subsequent aerostructures, and it is the pinnacle of SpaceX engine development. Delivered to NASA in 1963, the F-1 Engine remains the most powerful single-nozzle liquid-fueled rocket engine ever to be used in flight, and it launched 13 Saturn V rockets in space missions for the Apollo Program. The F-1 Engine currently on display at the Kennedy Space Center Rocket Garden is an early Rocketdyne prototype.

In 2019, EverGreene was contracted to conduct the conservation treatment of the F-1 engine located in the Rocket Garden. Before treatment, the engine exhibited various forms of corrosion and soiling on steel and Inconel components, non-original overpainting, and severe deterioration of its wiring insulation.

The conservation scope of work included rigging and moving the F-1 engine from the exhaust extension to a work area, followed by building custom fortified scaffolding to support the engine and provide access to the interior. General cleaning with carbon dioxide blasting and environmentally friendly solutions and remedial treatment of original metal components were performed. Finally, the overall application of corrosion inhibitor and re-wrapping of failed wire insulation was completed. EverGreene also developed a maintenance plan with recommendations for display parameters and periodic maintenance. Project work was complicated by the threat of Hurricane Dorian, which temporarily halted work and required a second relocation of the engine. The engine was relocated to its display environment following conservation treatment. 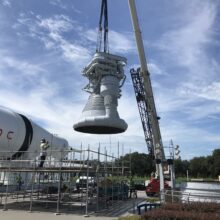 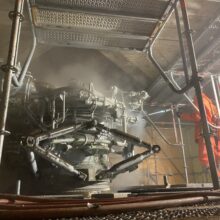 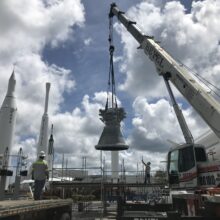 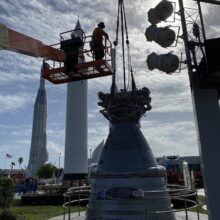 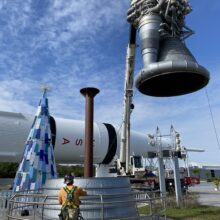 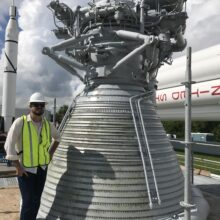 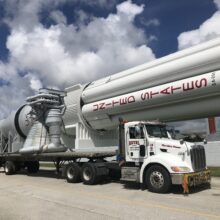