The Landmark Theatre opened in 1928 as the Loew’s State Theatre. This sprawling Thomas Lamb movie Palace is almost 35,000 square feet and seats 3,000. The theatre originally housed the Wurlitzer organ to accompany silent films. Over the years the organ and Tiffany chandelier in the lobby were sold. The theatre was briefly closed in the 70s, before being rescued by a group of volunteers.

Our work at the Landmark concluded in 2001. EverGreene restored the original artwork and architectural ornament- much of which had been lost. A paint analysis determined the original decorative painting scheme, and plaster technicians replicated missing elements of the architectural ornamentation. Conservators restored the large lobby mural depicting exotic Indo-Persian motifs; inpainting areas of damage and complete loss and reintegrating the artwork with existing elements of the decorative painting scheme. Extensive gilding was required to return the interior to its original exotic splendor. 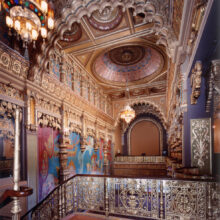 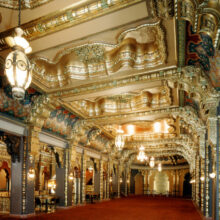 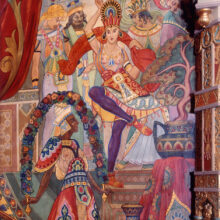 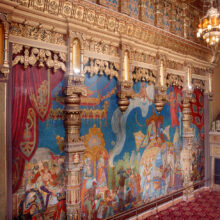 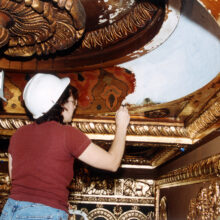