The New Mexico Museum of Art building was opened on November 24, 1917. It was constructed to replace the art gallery of The Museum of New Mexico, founded in 1909 and housed at the Palace of the Governors situated across Lincoln Avenue from the site. Designed by the architecture firm of Rapp and Rapp, the building’s stylistic roots are found in Isaac Hamilton Rapp’s New Mexico Building from the 1911 San Diego Panama-California Exposition, and even more closely in the firm’s Spanish-Pueblo style New Mexico building at the 1915 San Francisco Panama-Pacific Exposition. Modeled on several Spanish Colonial mission churches in New Mexico, Rapp and Rapp’s creation utilized reinforced concrete, brick, stucco, and timbers to replicate the distinctive massing and forms traditionally built using adobe bricks and earthen plaster. This iconic building established a striking and influential representation of the cultural identity of New Mexico, which had only recently achieved statehood in 1912.

EverGreene was retained by the State of New Mexico Department of Cultural Affairs to perform a condition assessment of exterior architectural wood features of the New Mexico Museum of Art. The purpose of the assessment was to identify deterioration and determine repair and restoration scopes for the wood elements, including historic vigas, latillas, corbels, and canales. EverGreene conservators carried out a site survey in May 2021 and developed a spreadsheet of treatment priorities for over 500 individual wood features. EverGreene also provided detailed work plans and annotated drawings to support future work. 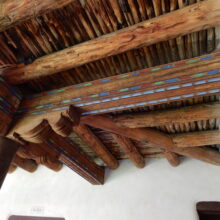 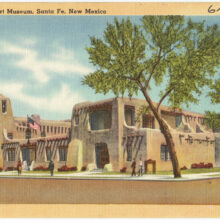 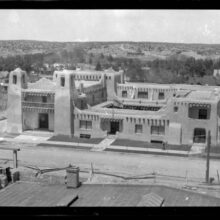 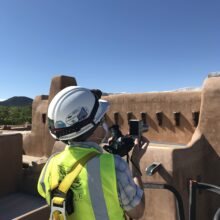 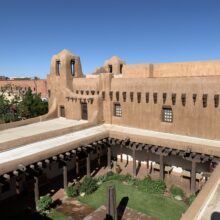 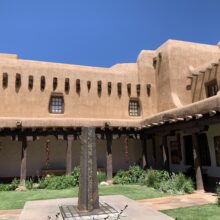