Built between 1931 and 1935, the Department of Justice, also known as the Robert F. Kennedy Building, melds Art Deco and Mediterranean Revival decorative elements into its Beaux Arts plan. Extraordinary mosaic pre-cast concrete ceilings by John Joseph Earley, and decorative doors and gates in aluminum and iron, designed by the architects Zantzinger, Borie and Medary and the sculptor Paul Jennewein, enliven the massive limestone structure. Greek, Mesopotamian and American Indian themes are interwoven into the rich decorative tapestry of the building.

In 2005 to 2006, we treated the iron gates on the 10th Street side of the building and all of the mosaic ceiling panels. Each massive gate, standing eighteen feet tall and weighing more than nine thousand pounds, was carefully freed from its hinges and removed for treatment. Temporary enclosures were constructed to protect the building while work occurred on the gates off-site.

Each gate was cleaned of failing paint and corrosion by controlled abrasive blasting. Deformed and damaged assemblies, broken and missing castings, and the long-missing lock mechanisms were reshaped, recreated, or recast as needed. After paint analysis confirmed that the gates had originally been painted a deep black rather than the existing gray color, each was coated with a base layer of spray metal followed by two coats of a high performance urethane coating. The gates were returned to the site and re-installed in their original locations. 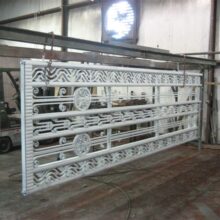 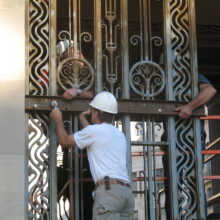 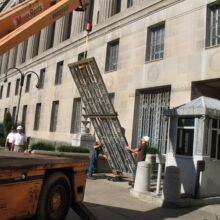