Opened in 1931 as part of the Warner Bros chain of movie theatres, the Warner Theatre in Torrington is a late work of renowned theater designer Thomas Lamb.  By 1980, the theatre was closed and slated for demolition but was saved in 1983 by a group of concerned citizens. Some of its most unusual features are the Star in a geometric pattern in the center of the ceiling, a peacock stenciling in an Indo-Persian motif also on the ceiling, and a host of unusual plaster ornamentation at various locations throughout the theater.

Our work at Warner began with the 2002 restoration. To begin the process of restoring this exuberant Art Deco style theater, we performed an initial historic paint investigation. Our team documented original colors, stencil patterns, and finishes using microscopic paint analysis and color-matching using the Munsell Color System. Using this information, we created a Mockup of decorative painting restoration, and followed with a complete restoration: polychromy, stenciling, gilding, glazing, sponge-painted, and stippled to replicate the original pattern on texture. Our gilding expertise was utilized in aluminum leaf, and Dutch metal with glazing. One especially interesting element of the decorative painting on this project was the use of glitter stenciling, made of brass which had tarnished, we replicated in a spectrum of metallic colors. Faux bois in exotic tropical wood similar to zebrawood was restored. After extensive research by our team to find mills to replicate unusual historic textiles, we were able to procure the fabrics needed, including copper-colored fake “monkey fur” for the walls and banana-leaf patterned side draperies.  We also restored ornamental plaster throughout the building, conserved lobby murals depicting local historical scenes, and restored the architectural woodwork throughout the theater. 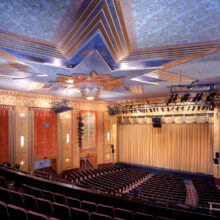 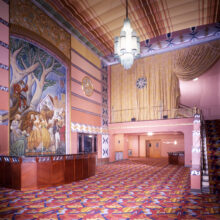 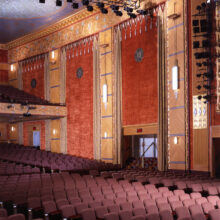 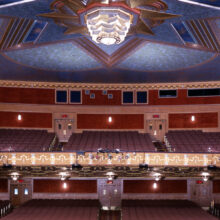 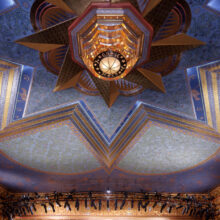 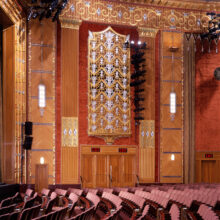 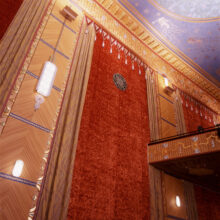 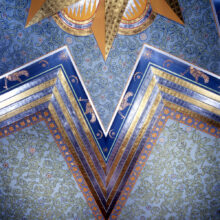