The Little Building at Emerson College is located at 80 Boylston Street at the corners of Boylston and Tremont Streets in Boston, MA. It is a mixed-use residential and commercial structure, originally built in 1917, by architect Clarence H. Blackall. The building’s name does not refer to the size (a common misconception) but to the original financier, John Mason Little. Little was an active community member of the greater Boston area and one of the city’s leading businessmen.

Emerson College purchased this modern-Gothic building and opened it for use in 1995. The upper floors of the 12-story building function as residence halls for approximately 750 Emerson students. The lower floors host a fitness center, cafeteria, and a student performance center called “The Cabaret”.  The first and second floors are bays, originally intended as storefronts. Little historical documentation exists but it appears that few alterations have occurred to the façade, central structure, and interior spaces over time.

The Little Building is currently undergoing a massive renovation campaign. EverGreene conservators were commissioned to complete an on-site investigation in February 2019, to understand the historical construction methods, materials, and conditions of the plasterwork. A historical paint campaign was completed to maintain the structural and aesthetic integrity of the building.  Paint and finish samples were extracted from the interior areas of the building. Subsequent to fieldwork, collected samples were analyzed to determine the layer structure (also known as stratigraphy) of historic finishes and identify historic colors. EverGreene plaster team subsequently recreated damaged and missing ornamental plaster panels based on the remaining ornamental plaster ceiling. 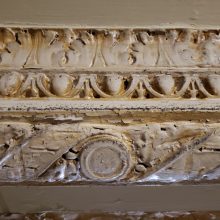 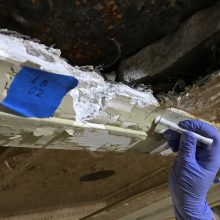 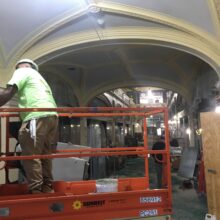 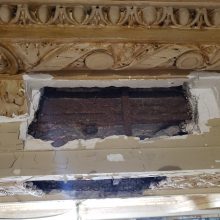 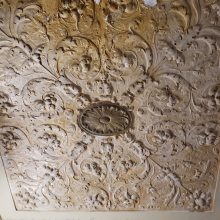 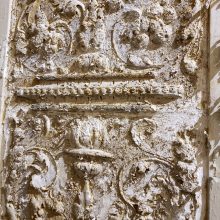 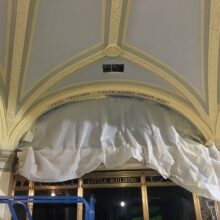 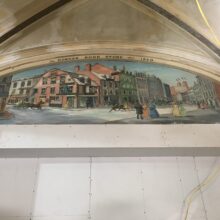