Robert R. McCormick was born in 1849 and made tremendous impacts on politics, media, and First Amendment issues. He went on to become the owner and publisher of the Chicago Tribune, making it the famous magazine for which it is known today. The McCormick House, built in 1896 by Joseph Medill, McCormick’s grandfather, was used as Robert and his first wife Amy’s summer home, and later became their permanent residence. The grounds are known as the Red Oak Farm, and they renamed the estate “Cantigny” to honor the French village where Robert served in World War I. By the 1930s, Robert turned the Cantigny estate into the Tribune Experimental Farms where 1000 acres were devoted to testing a wide variety of crops and animals. A regular column, “Day by Day on the Farm,” ran in the Chicago Tribune, reporting on ongoing farm operations. Farming operations ceased after Robert’s death in 1955 and Cantigny opened as a public park and museum in 1958.

In October 2020, our conservators completed an initial assessment documenting, treatment testing, and photographing the historic, hand-painted wallpaper decorating the walls of the dining room in the Museum. These wall coverings were purchased by McCormick and his second wife, Maryland, on one of several trips to China. The 70-foot mural was originally painted on rice paper, which the McCormicks had put on a thin linen backing and cut into panels to be installed as wallpaper for the dining room. After Mr. McCormick passed away in 1955, Mrs. McCormick moved to Washington, DC, taking the paper with her, but later returned it to the house where it was reinstalled in its original location. Due to planned building renovations, selective sections of the mural were removed to allow access for construction and repairs to the wall surfaces behind. In addition, plans are in place to infill one of the doorways. A new section of the mural will be created to cover the filled space and unify the painted panels on either side. 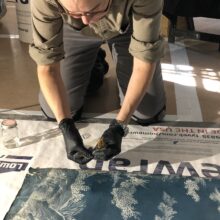 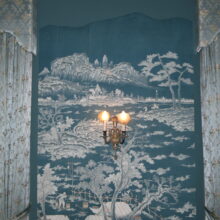 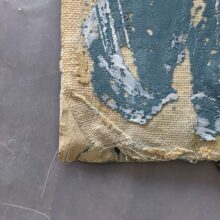 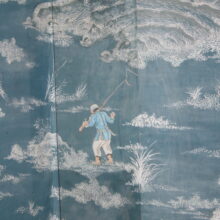 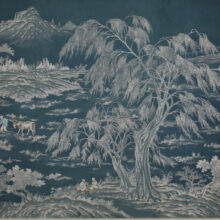 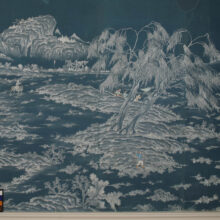 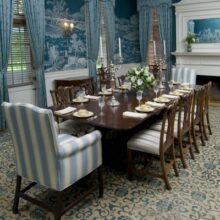