The Carnes Playhouse was built in 1933 by Arkansas State Representative Grover Carnes for his young daughter, Harriet. The small (12’ x 12’) wood-framed house was outfitted in meticulous detail with all the trappings of a full-size house. Amenities included fabric wall coverings, fully electrified ceramic light fixtures and a functional fireplace. The playhouse and its contents, including upholstered furniture and child-sized objects, was donated to the Arkansas Post Museum in 1978.

The playhouse was installed outdoors on the property of the Arkansas Post Museum in Gillett, Arkansas where it remained for the next three decades. However, continued exposure led to severe deterioration of the building. We were contracted in 2005 to perform an assessment of the playhouse and make recommendations for its repair. We identified many deleterious conditions including: insect infestation and moisture damage which had severely compromised some of the wood structural elements; failed exterior paint finishes; significantly deteriorated interior furnishings and finishes. Attempts to maintain the playhouse over the years had brought back the original cedar shingle roof, but replaced or covered over original wall coverings with modern ones.

We were contracted in 2008 to direct the restoration of the playhouse. The house was moved into the museum to prevent further deterioration. Failing wood was removed and replaced with sound timber. Paint analysis confirmed the original paint scheme for repainting. Vinyl wallpaper was painstakingly removed in the kitchen to reveal the 1930’s era “Mickey Mouse” fabric wall-covering, still intact. We researched and sourced historically appropriate fabric and wallpaper for the interior. Various toys of composite materials were taken off-site for conservation, which included gentle cleaning, localized repairs, and applying protective coatings. 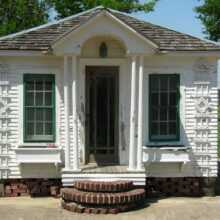 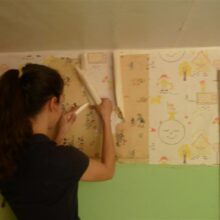 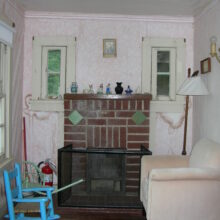 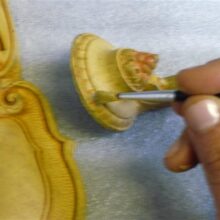 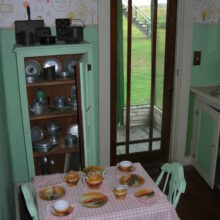