Bordering the White House grounds in Washington, DC are two large parks managed by the National Parks Service (NPS): the Ellipse to the south between the White House and the National Mall, and Lafayette Park to the north. Sighted among the historic monuments that fill the parks are six decorative and memorial fountains. The oldest, the Butt-Millet, dates to 1913 and commemorates two victims of the Titanic’s sinking. In contrast, the monolithic granite Haupt fountains were commissioned in 1969. Stylistically, the two pieces represent the range of 20th century architecture, from Beaux Arts Classicism to Brutalist Miminalism.

All of the fountains had suffered from some degree of deterioration by 2005 when we were contracted to perform materials testing, research, and analysis in the development of comprehensive restoration plans for each fountain. Working as a team with Wisnewski Blair Architects, our conservators studied each fountain, determined the extent of and causes of the deterioration, and developed treatment plans accordingly. Work included testing and researching material sources and methods for repair and replacement of marble, granite, cast stone, bronze, brass, and stainless steel. The restoration plans ranged from modest cleaning and stain removal associated with deteriorating electrical and water feeds, to stone dutchman and unit replacement and complete re-surfacing of exposed aggregate concrete.

After review and approval by NPS and White House staff, we prepared drawings and specifications for the implementation of the work. 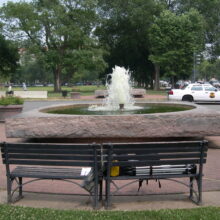 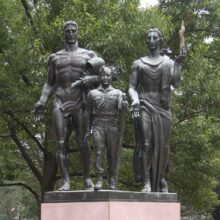 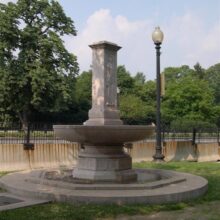 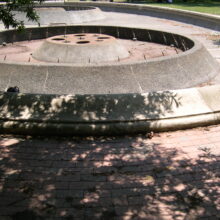