Like many towns throughout America, Saratoga Springs erected a monument in Congress Park to the city’s sons who fought for the Union during the Civil War.  The zinc statue depicts a private on picket, one of the tributes to the sacrifices of the simple soldier rather than solely the Generals and statesmen that were erected in the late 19th century by both sides of the conflict. This model was made by the J.W. Fiske Company of Brooklyn NY and was one of many of the same statues they created. During the spate of statue destruction in early 2020 the life-sized figure in Saratoga Springs was toppled from its high pedestal and shattered into many pieces, some as small as an inch across.  City employees collected all of the pieces but despaired about the possibility of restoring this point of civic pride and history until they found us. EverGreene conservators are experts in the restoration of zinc statuary, having restored dozens of other works and two other versions of this same statue in Canton, MA and Oak Bluff, MA.

The fragments were transported to our DC Studio for the restoration. Each part was cleaned to remove soiling and paint. Working from the bottom, sections were carefully soldered back together along original seams or new breaks. It was a process akin to a three-dimensional jigsaw puzzle, where small and obscure pieces were tried against each other until their locations were determined and they could be re-attached. Several elements were missing, including the gun strap, a thumb, and some other pieces that were not recovered. Other elements were too severely deformed and had to be recreated. Simple losses were fabricated by our artisans from sheet zinc. Complex pieces were replicated by making a wood or foam mold and were then cast in a foundry.

A stainless steel armature was introduced to the statue to support the re-assembled figure and provide resistance to future possible vandalism. After fully rebuilding the figure and fairing the joints, it was re-painted in a faux bronze finish. This technique creates the appearance of a brown patinated bronze and was used on this work originally. The finished piece was crated, returned to the site, and re-erected on its original base in November 2021. 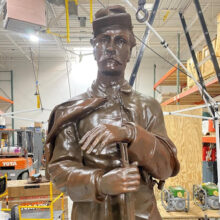 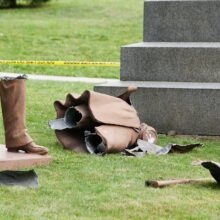 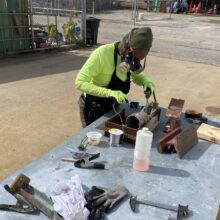 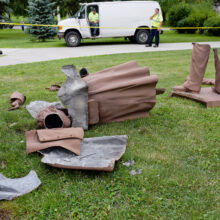 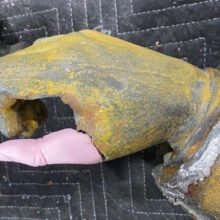 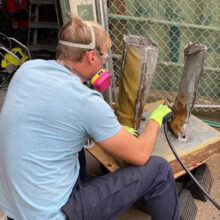 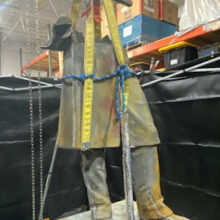 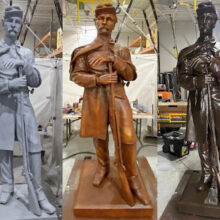