The original statues of War and Peace, and Genius of America, were designed by neoclassical painter and sculptor Luigi Persico for the main East facade of the U.S. Capitol to plans by architect Charles Bulfinch—a project commissioned by John Quincy Adams in 1829. The 1834 the statues were delivered and installed on the pediment and in niches flanking the doors to the Capitol Rotunda. In the 1950’s the marbles of the sculptures were found to be deteriorating and so were replaced with replicas carved from the original. Molds were taken of the stones after some recreation of lost features and plaster versions were cast to use in carvings the replicas that are currently on the Capitol’s enlarged east facade.  These plasters, and a model of the Capitol showing how it would look after enlargement, had been on display in the Cannon House Office Building Rotunda.

In 2016, our conservators were contracted to assess the condition of the U.S. Captiol model and other plaster sculptures that adorn the building’s exterior. The conditions of each of the plaster sculptures was assessed with a focus on their structural stability and capacity to withstand transportation to an off-site location during the planned renovation of the building. The goal was to study and document conditions in written and photographic form, locate assembly seams if feasible, perform non-destructive testing to identify structural systems wherever feasible, and to determine the viability of relocating the plasters.

The additional aim of the assessment was to define a scope of work for preserving each plaster sculpture while it was stored. Exterior and accessible surfaces were studied, supports inspected and mapped. Recommendations for repair and for conservation treatment were provided.

EverGreene was then contracted to disassemble the plasters and remove them from the site. Each was carefully rigged, crated, and transported, The Genius of America to long term storage and the others to our Dc-Based studio for treatment.

The U.S. Capitol Model was similarly cleaned, restored, and prepared for return to the Capitol complex at a site to be determined. 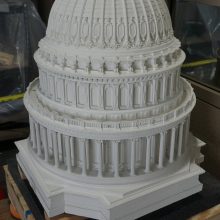 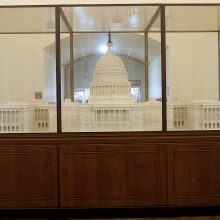 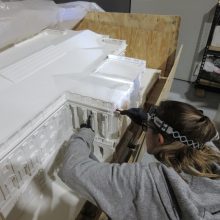 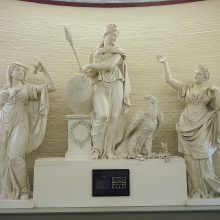