The Little Chapel That Stood

Known as the “little chapel that stood,” St. Paul’s Chapel has endured over 250 years of New York City’s history, making it the oldest public building in continuous use in the city. St. Paul’s Chapel was built as a “chapel-of-ease” for those in 18th Century New York City who deemed the walk to Trinity Church on Wall Street too far. When the chapel was finished in 1766, it stood as the tallest building in the city. Ten years later, the chapel survived the Great New York City Fire, a result of a Revolutionary War battle that burned a quarter of the city. At the end of the war, on the day George Washington was inaugurated as the first president of the new United States, Washington and members of Congress worshiped at St. Paul’s Chapel. Washington continued to attend services at St. Paul’s for the two years in which New York City was the nation’s capital.

More than two centuries later, St. Paul’s Chapel escaped another tragedy virtually untouched. On September 11, 2001, during the terrorist attacks, the chapel, which sat opposite the east side of the World Trade Center, became a place of refuge and recovery for rescue workers and volunteers. In the following weeks, it served as an impromptu memorial site for the victims.

Although St. Paul’s Chapel survived 9/11 with only one broken window, centuries of use will take a toll on a building; as one of the best examples of late Georgian architecture in New York City, the chapel needed to be restored. In 2016, EverGreene restored both the interior of the chapel as well as the 9/11 memorial at the rear of the building. EverGreene scraped, primed, and painted the original plaster walls and repaired damaged areas. After the ceiling was preserved, new plaster was injected to stabilize cracks in the walls. Artisans and craftsmen gilded the pulpit, polished the wooden altar rail, and restored the original wooden doors in the main sanctuary. Our team also restored the eight magnificent sterling silver chandeliers that hang from the ceiling. The chandeliers were removed, taken apart offsite, cleaned, and broken or missing components were repaired and replaced.

St. Paul’s Chapel continues to impact the lives of New Yorkers, as it functions as a thriving Episcopal parish on Broadway. St. Paul’s Chapel is listed on the National Register of Historic Places and recognized as a National Historic Landmark. 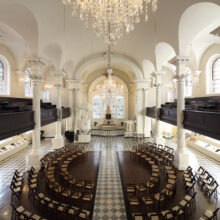 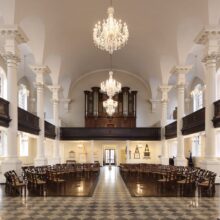 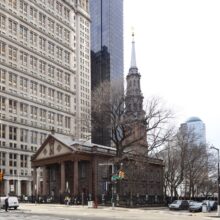 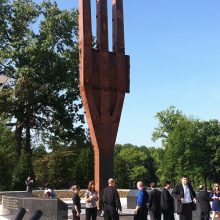 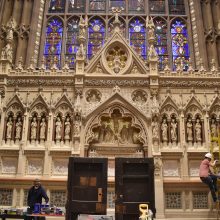