Condition assessment with photo-documentation of a Fabergé silver desk clock

This clock was presented by the officers of the Imperial Horse Guards to Grand Duke Pavel Aleksandrovich, uncle of Nicholas II and their regimental commander, on the occasion of the end of his command. It displays the regimental banner of the Horse Guards on the front, and the names of fifty-five fellow officers are engraved on the back. The chief decoration comprises military drums that serve as inkwells, drums that can be used as candleholders, and trophies rendered in silver gilt. A concealed music box within the clock plays The March of the Imperial Guards. 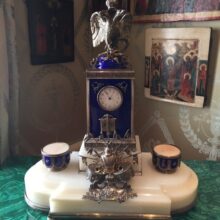